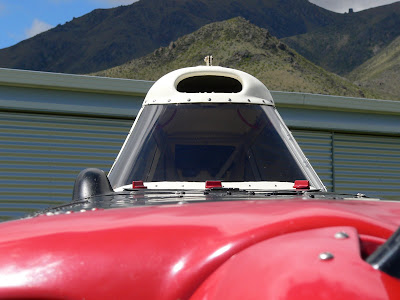 We have a winner.
A gentleman from a far away country, who wishes to remain anonymous has come up with the goods.

It is Piper PA 25-235 Pawnee D ZK-PPA , c/n 25-7656063 "Southern Belle" of Southern Soaring Omarama Ltd as seen at Omarama on 02-01-2009.
We were looking into the air intake above the cockpit.
This aircraft was rebuilt in NZ in late 1984 I believe using the fuselage of ZK-CEM. It was first registered to John Shivas of Ashburton on 12-07-1985, first flying here on 01-11-1985 and delivered to Charlie Sewell of Mayfield as a sprayer. It moved north to Barklay Aerial Spraying at Mercer in 1997 and then moved up to Dargaville in 1999 for Agtech Air Services.
It was purchased by Southern Soaring in June and ferried south by Chris Rudge and spent time with AVTEK at Timaru having a tow hook fitted.