I remember when. Invercargill flood 1984. 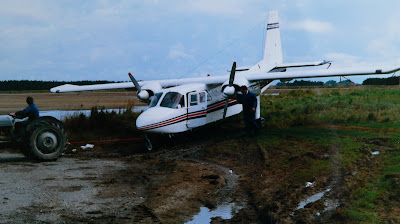 Thanks to the TVNZ news last night for a reminder - The 25th anniversary of the Invercargill floods is going down about now. I was fortunate enough to be working out of Invercagill at the time, although I was away on annual leave at the Gliding championships at Alexandra during the initial event. Our house was on the "hill "at Clifton, so we were not flooded out.
I got back into town on 06-02-1984 and managed to get some photographs of the clean up operations going on at the airport.
The two shots above show the Britten-Norman BN2A-21 F-OCXP (c/n 483) belonging to Montagnat Mining of Noumea being towed back down onto the tarmac . It along with a couple of other aircraft including the Beech 95-A55 Baron ZK-SUN1 and I think a Fletcher had been dragged up on to the stopbanks near what was at the time the H/C (NZ) hangar to escape most of the flood water damage. 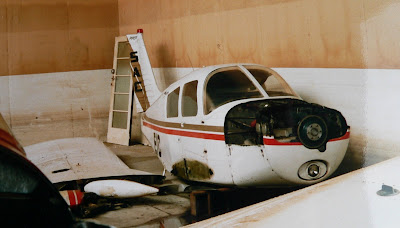 Not so lucky were the hangars themselves where some of the aircraft had their noses raised onto boxes and oil drums to try & keep the engines out of the water (with limited success). Above is the Southland Aero Club Piper PA-28-140 ZK-EIC (c/n 7725214) alread stripped to help the drying out process. It went to Hamilton Aero Maintenance for a tidy up and is still curent today around Tauranga. 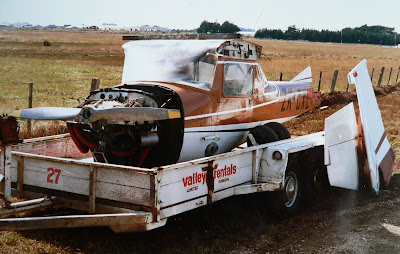 About to be taken away for remedial action was the Cesna 150H ZK-CXL (c/n 68308) which was syndicate owned. After repairs it went to Rotorua. It is still active, now in the Christchurch area. 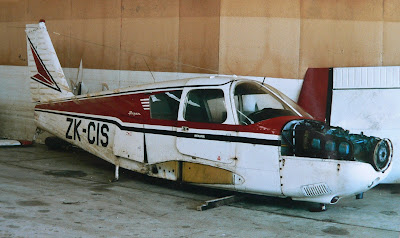 One of my favourite machines at the time was this Piper PA-28-235 Cherokee ZK-CIS (c/n 10630). It had its nose raised and you can see the high tide mark runs from about 2/3rd the way up the rudder to about the leading edge of the wing. It is also still current out of Hamilton. 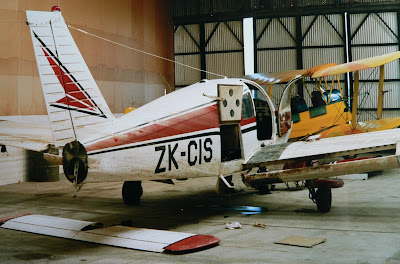