I have been after a photo of the Macchi MB 308 ZK-MDF for a long time and the recent information from Allan Churn on the blog got me searching again.  In fact Allan came up trumps with photos of ZK-MDF which was great, and successfully ended my search.  The reason why I am interested in the Macchi MB 308 is that it is a very early version of what we know today as a light sport aircraft and it therefore should be included in my never ending series on homebuilt and sport aircraft of New Zealand.

The Macchi MB 308 was designed in Italy following WW 2 by Emanno Bazzocchi and it first flew on 17 January 1947, which is earlier than our first types of 2 seat homebuilt aircraft appeared (such as the Jodel D 11 or Minicab).  Like those types it was of all wooden construction, but it was an early example of a tricycle undercarriage aircraft.  It had a long one piece wing of 10.00 metres (32 feet 10 inches) while its length was 6.53 metres ( 21 feet 5 inches).  Similar to more modern 2 seat sport aircraft its empty weight was around 410 Kg (904 pounds) while its MAUW was 650 Kg (1,433 pounds).  And with a Continental C 85 engine it cruised at around 90 knots (165 km/hr).  The MB 308 was ordered in quantity by the Italian Air Force which leased them out to Italy's aero clubs.

We have had one example imported into New Zealand, but it wasn't here for long.  ZK-MDF (c/n 79/5852) was first registered in Italy as I-ADHF to the Marchese Francesco di Francia of Palermo in Sicily and it was delivered to him on 21/11/47.  It went to the Italian Aero Club at Rome on 19/11/62 and then to Felice di Napoli, also of Rome, on 27/12/92.  He had it cancelled from the Italian register in October 1998 and it was exported to New Zealand being registered to Sky Arrow New Zealand Ltd of Wellington (Felice di Napoli) as ZK-MDF on 1/10/98, later transferring to General Avia South Ltd of Wellington  (also Felice di Napoli)in October 1999.

This is the only photo I had managed to find of ZK-MDF in New Zealand, taken at Masterton.
ZK-MDF was cancelled from the New Zealand civil register on 17/9/02 and it was exported to Australia where this photo was taken at Southport Airport, Queensland in October 2003, still in the ownership of Felice di Napoli. 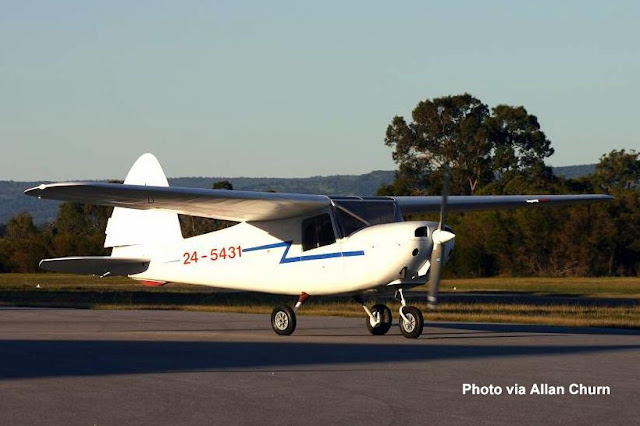 After having the Australian registration VH-MBZ reserved, it eventually went into the ownership of Allan Churn of Ferndale, Western Australia and was transported to Serpentine Airport, South of Perth.  Allan eventually registered it on the RAA register as 24-5431 and he is seen taxying it in late 2008.  Unfortunately it suffered an accident on 4/7/09 when its wingtip hit a parked aircraft and it has not flown since.  It has recently been listed for sale on Aviation Trader in Australia.
Thanks very much for the photos Allan.