One of the neat things of doing a series like this on the blog, is that interesting stuff pops up from other people.  A classic case of you don't know what you don't know!

One such example was when Peter Layne sent a photo of a homebuilt helicopter that is currently under refurbishment at Classic Flyers Museum in Mt Maunganui, that was built by Ron Hintz in the Te Puke area back in the late 1970s and early 1980s: Ron Hintz's daughter is Bernice Hintz and she sent this photo of her father's helicopter.  She recalled that it was built in the late 1970s and early 1980s and that he designed and built the airframe and engine himself.  It was hovered while tethered, but it was never registered by the CAA.  The dates would actually make it our first homebuilt helicopter, predating the first Rotorway types.  Thanks for the photo Bernice. 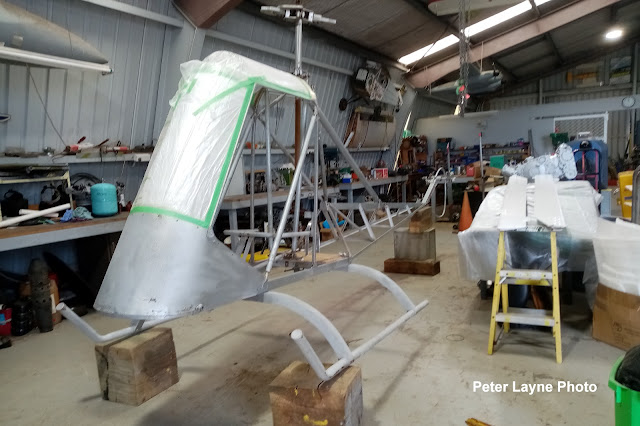 The helicopter was donated to Classic Flyers Museum where it has been stored until recently, when it reached the top of the refurbishment list and is now being worked on by volunteers at the museum, as shown in the above photo.
If any blog readers know of other unregistered homebuilt helicopters in New Zealand we would love to know!