After completing its wartime service C-47B-45-DK NZ3556 had been allotted to NAC as ZK-AOK. However, with the airline being busy in set-up mode, the allocation at that time was postponed. In mid-1947  the aircraft took up the registration ZK-APK and was flown to Melbourne for conversion to civilian DC-3D standards.

Named Poaka it was one of the NAC aircraft used on the Pacific regional services. 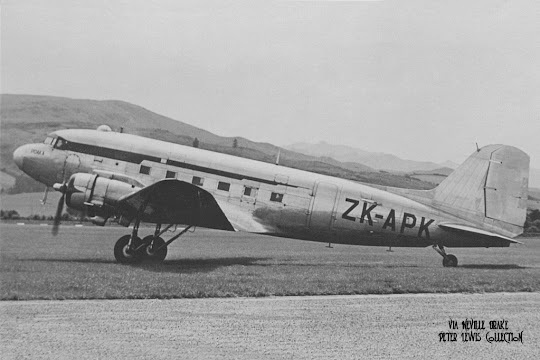 In the 1950s, ZK-APK was painted up in the classic NAC colour scheme and operated on internal services.

ZK-APK was one of the four DC-3Ds withdrawn from service on 30 June 1962. It returned to service in August 1963 and converted to Skyliner status in August 1964 in replacement for the crashed ZK-AYZ.

ZK-APK was then renamed Kaikohe. 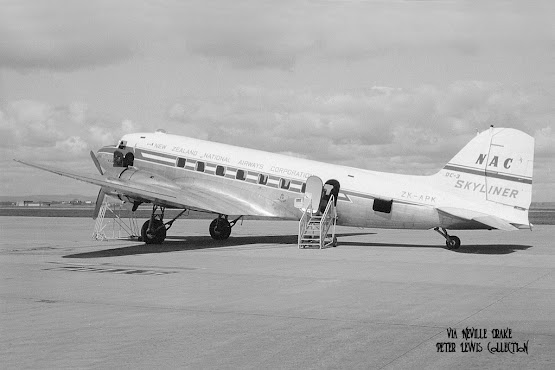 ZK-APK was leased to Fiji Airways from 1965 until 1967 and operated with them as VQ-FAH.

Returning to NAC service in September 1967, ZK-APK was finally retired in October 1968.

Sold to Airland (NZ) Ltd. in November 1968, it was not registered in their name until 7May1969  and not actually used operationally until 13Oct1970.

When Airland dissolved, Fieldair took ownership of ZK-APK from 20Feb1978.

Ownership was transferred to Fieldair Holdings (Central) Ltd. as from 18Nov1980. The final flight of this DC-3 took place on 3Jul1981 and the aircraft was WFU Milson @ 42764hrs. The registration was cancelled on 30Mar1984.

Stored at Milson until sold to Rangitikei River Aventures mid-1985. To Mangaweka for display as ZK-AOK at their base beside the petrol station.

Repainted as the Cookie Time DC3, and latterly as the Mangaweka Skyliner.