A Couple of Superair Turbine Fletchers

Stratford is mainly Ravensdown Aerowork country but last Saturday a Superair turbine Fletcher was operating in the area. 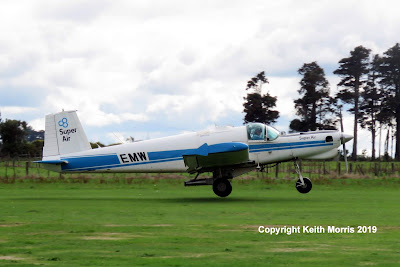 Turbine Fletcher FU 24-950 ZK-EMW (c/n 277) lifts off after having called in to fit a spreader.  You can see its history in an earlier post at: https://nzcivair.blogspot.com/2018/01/fletcher-zk-emw.html 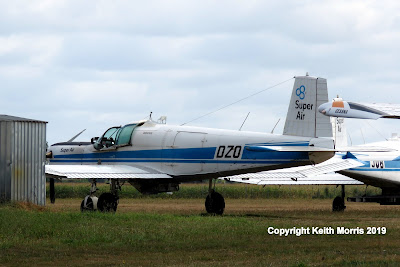 Back on 18 February I managed the best I could do photo of another Superair Turbine Fletcher FU 24-950 ZK-DZO (c/n 212) at their base at Hamilton airport in the current fleet colours.  This aircraft was first registered in January 1976 and then went overseas to fly in Pakistan and Sudan before returning to New Zealand for Superair in July 1993.  It was then rebuilt with the extended fuselage and large hopper and re-powered with a Pratt and Whitney PT6A-34AG turbine engine.  It first flew in this configuration on 4-10-06 and was marked as a Fletcher 2000EX.

It is photo'd above by Lord Nelson in its earlier Superair colours at Masterton on 3/10/13.