There has been another model of Morgan Aero Works aircraft registered in New Zealand - the one off Morgan 10 Cheyenne.  This aircraft was a 15 metre span motor glider powered by an 80 HP Jabiru 2200 engine.  The fibreglass wings were constructed using foam ribs as far as I can make out, and the cockpit/engine mount/undercarriage mounts were connected by a steel frame.

The aircraft was registered VH-NZJ2 in Australia on 22/1/14 and its first flight was in May 2016 with an 18 metre 4 piece wing which was later replaced wit a 15 metre wing.  There is a video of it flying at:  https://www.recreationalflying.com/topic/27692-glider-development/  (You have to scroll down a bit to the video).

Garry Morgan returned back to New Zealand in 2017 with the aircraft being cancelled from the Australian Civil Register on 17/2/17. 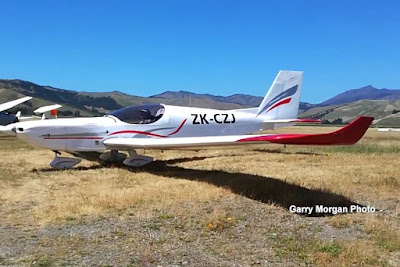 Sadly, the aircraft didn't last very long on the New Zealand Register as on 31 December 2017 it suffered a major wing failure when flying over the Blairich Range South of Blenheim.  Remarkably the aircraft spiralled down (a bit like a sycamore seed I guess) and impacted on a steep slope with only minor injuries to the two occupants who walked to the top of the range and called for help by cellphone.  The aircraft was fitted with a ballistic parachute but it could not be fired because the wing had folded over it.  An amazing escape!

It was cancelled from the New Zealand Civil Register on 18/1/18.