The next type of sport aircraft to be registered in 2008 was Bruce Cooke's own design Avian Adventurer ZK-CKE2 (c/n AV08-1) which was first registered on 19/11/08, although it did not fly until March 2011.  (The first ZK-CKE was also a homegrown design from the Waikato region, being the second Bennett PL 11 Airtruck from Te Kuiti).

Bruce advises that his aircraft is influenced by the classic taildraggers such as the Piper Cub, Cessna Bird Dog and the Auster series, and it took 10 years to build.  Construction is of rivetted interlocking aluminium extrusions.  This construction method results in a high component count but it avoids the necessity for expensive sheetmetal tooling.  The outward sloping cabin sides reduce the amount of bending required for the bottom longerons while allowing very generous shoulder room for the 2 side by side occupants and giving an almost directly down view through the fully glazed upward opening doors.  Bruce says that the all around visibility is very good.  The airframe is covered with Stits Polyfiber fabric.

The Avian Adventurer specifications are:  length 7.63 metres, wingspan 10.23 metres.  The engine is Subaru EJ 20 "Matariki"  (Subaru and Matariki both refer to the cluster of 6 stars in the Taurus constellation named Pleiades by the ancient Greeks), which produces 140 HP Nominal and drives a 3 bladed electrically variable Ivoprop through a Neil Hintz gearbox.  The cruise is around 90 to 95 knots and the stall speed is 35 knots.  It has flown around 185 hours to date which is a credit to Bruce and his design. 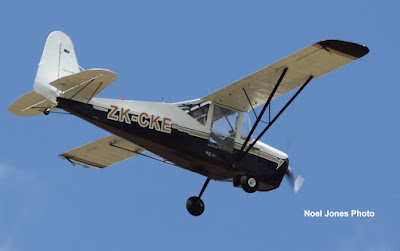 The Avian Adventurer's first adventure - its first flight at Hamilton on 12/3/11 with test pilot Bob Monds.  You can see the outward sloping side windows in this photo. 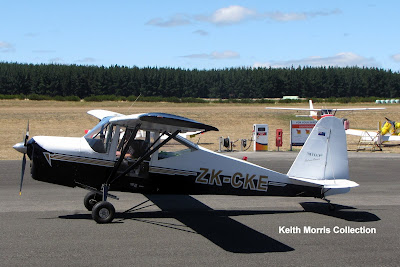 Bruce taxies his aircraft for take off from Taupo on 6/3/14, en route to the 2014 SAANZ flyin at Hastings. 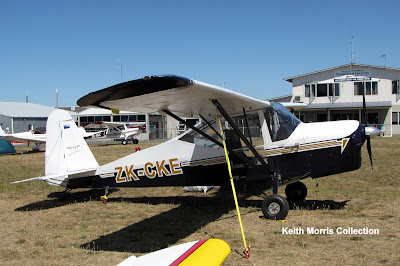