As the summer flying season winds down, I will return to my series on Sport Aircraft of New Zealand, which is getting near to being completed.

The next type of sport aircraft to be registered here was the one-off Arion Lightning.  The Arion Lightning is an American composite tri-gear low wing 2 seater that was designed by Pete and Ben Krotje and Nick Otterback of Arion Aircraft LLC of North Shelbyville, Tennessee, who are also the American agents for Jabiru engines.  The prototype first flew in March 2006 with a 120 HP 6 cylinder Jabiru 3300 engine.  The aircraft has been developed since that time and the latest model is flying with a 180 HP Titan XIO 340 engine in the US.  The Lightning was judged the best composite aircraft at Sun"N"Fun in Florida in 2008.  Arion Aircraft also built the prototype electric Sun Flyer 2 for Bye Aerospace, the lines of which are nearly identical to the Arion Lightning LS-1.

We have had only one Arion Lightning in New Zealand to date: 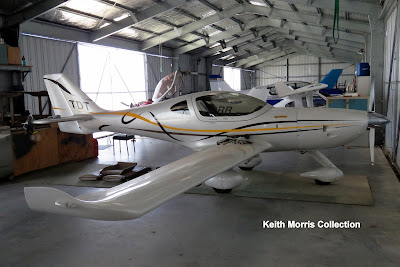 ZK-TDT2 (c/n 46) was built by Ronald (Ron) W Ritchie at the Arion factory at Shelbyville under the builder assist programme, and it was registered to him at Hamilton on 6/4/08.  I understand that the owner is a dentist and TDT stood for "Tomorrow's Dentistry Today".  It was damaged on 18/12/09 at Hamilton but was rebuilt.  On 22/7/15 ownership transferred to James (Jim) S Walker of Hamilton and he re-designated it as a Class 2 microlight on 16/9/15.  The above photo was taken at Te Kowhai on 20/12/16.

More recently Jim has been doing some upgrading work on the aircraft and he re-registered it on 27/10/17 as ZK-JMZ2, but it has not yet flown under this registration.