Jean 210 was at Kaipara Flats airfield on 19/3/17 and photo'd Tim Harrison's new Shock Cub.  The Shock Cub from Zlin Aviation is a majorly re-worked Savage Cub for the extreme STOL market.  Why it is a Shock Cub is explained in rather flowery language on the Zlin website in that: 1. It will shock afficionados of this type of aircraft, and 2. It will pleasantly shock with its features and performance (I said it was flowery!).

The main differences from the Savage Cub are in the undercarriage which is a totally new design with long travel shock absorbers and big tyres, and the all new wing which is claimed to have a "hyper STOL profile", and has double slotted flaps.  An optional extra are fixed carbon-fibre slats and ZK-EUP is fitted with these, as can be seen.

The performance focuses on STOL with a claimed minimum flight speed (one up) of 18 mph!  and again with one up the landing roll is claimed to be 18 metres! 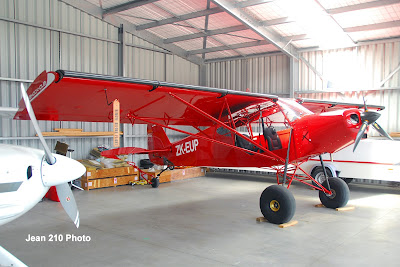