General Avia was created by Stelio Frati in 1970 with the aim of developing and building new prototype designs.
One such was the General Avia Avia F.22R Pinguino.
This was a development of the fixed gear F.22 and has a similar appearance to that of the SIAI Marchetti SF.260.
We have had one example on our ZK register.
ZK-JJJ (c/n 021) was registered to General Avia South Ltd of Wellington on 11-02-1998.
It departed from Rome on 27th of February 1998, passed through Bankstown on the 14th March, and flew into Auckland on the 15th March 1998.
It was listed briefly with the Wellington Aero Club (Inc) from 01-09-1998 until returning to General Avia South Ltd on 03-02-1999.
About this period the registration of ZK-MDF was mooted for this aircraft but seemingly this was not taken up. 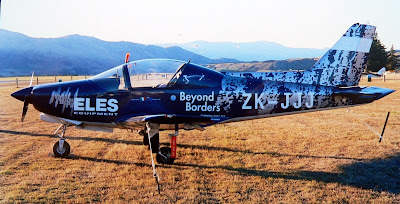 I photographed it (above) at Wanaka not long after sunrise on 10-04-1998 with a De Havilland product parked beyond and an early arrival on long finals. 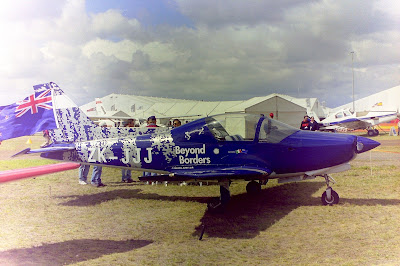 It flew back to Australia and was captured above by David Eyre on display at the Australian International Airshow at Avalon on 20-02-1999.
Its NZ registration was cancelled on 14-05-1999 for it to become VH-PIQ on 21-06-1999 with Arena Aviation Pty Ltd at Archerfield, Queensland.
Ownership was transferred to Felice Di Napoli on 21-02-2000 - initially with a Kelburn, Wellington NZ address but soon of Paddington, Queensland. 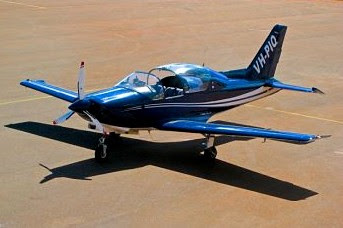 Pic above shows it as VH-PIQ thanks to Mr Google.
Ownership was transferred to Hew Mills of Smithfield, Queensland on 13-09-2004. 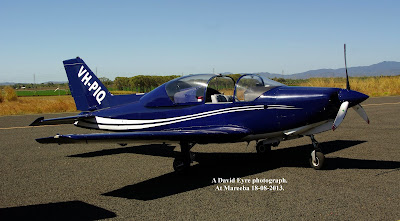