MOTAT's DH 98 Mosquito T 43 is still on display around the same spot as before.  This aircraft is painted as NZ2305. 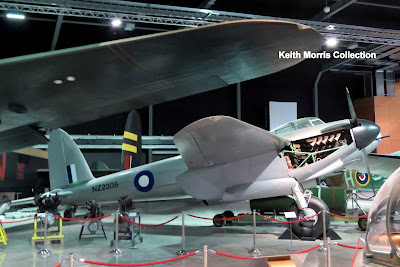 This aircraft was built in Australia and came off the assembly line as A52-1053 after WW 2 had ended.  It was bought on charge by the RAAF on 6 August 1946 and stored before being sold to the RNZAF on 18 December 1946,  It was flown to Ohakea on 2 April 1947 by an Australian crew and again went into storage.  It was declared surplus in 1953 and sold to Mr Robin Coleman who stored it on his farm at Galpin's Line, near Marton, where it slowly deteriorated until being donated to MOTAT in 1967.

The fuselage was restored by MOTAT volunteers over many years and the wing was rebuilt by the RNZAF at Wigram.  The aircraft was completed by 2009 and has been on display in the Aviation Hall since it opened in 2011.  You can see more about the aircraft Here

Having recently been treated to a flying Mosquito in RNZAF colours, the roundel and tail flash are different on NZ2305.  They are the Australian Air Force WW 2 markings so maybe this was how it was when it was delivered and it never flew here in RNZAF colours?  Can anyone confirm or deny?
Posted by Sir Minty at 08:31