Another new sport aircraft from Sports Aircraft New Zealand Ltd is the Zlin Savage Cub ZK-DAG2 (c/n 306) which was registered on 7/7/15 to the ZK-DAG Syndicate of Auckland.  Like ZK-SPZ it also arrived by container in early July.  It is our eighth Zlin Savage although only six are still registered, and it is the second ZK-DAG sport aircraft after Merv Meredith's Minicab which was registered in November 1971. 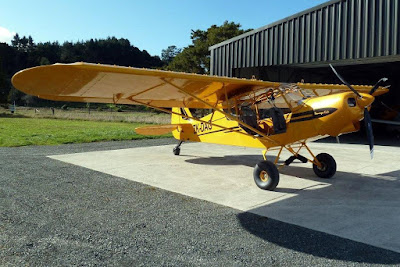 It is photo'd today by Tim Harrison of Sports Aviation outside their hangar at Kaipara Flats airfield.  Although registered to an Auckland address, it is going to be based at a private airstrip at Wanaka. 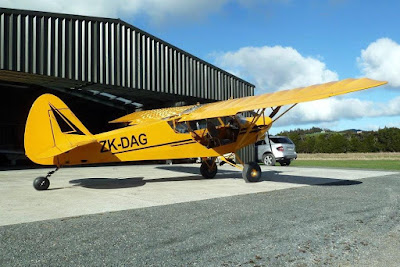 Sports Aviation Ltd are the New Zealand agents for Zlin, Glasair, Flight Design and The Aircraft Factory - quite a nice line-up.

Tim Harrison also told me a bit of background to the Glasair Sportsman ZK-SPZ that I posted about yesterday.  It was built by Tim at the Glasair facory in  March under a builder-assist programme called "Two Weeks to Taxi".

Thanks again to Tim for the photos.