A couple of interesting sports aircraft were at Ardmore on Monday. Both are making progress and we will see them flying in the near or medium term future. 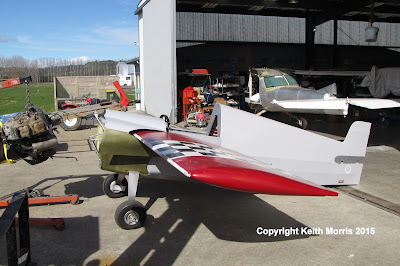 Cassutt Racer ZK-DHJ has made good progress since my last post on this machine, with the fuselage now covered and a trial fitting of the engine was being carried out.  The wings are still in the original colours but the aircraft is going be repainted in a snazzy racing scheme. 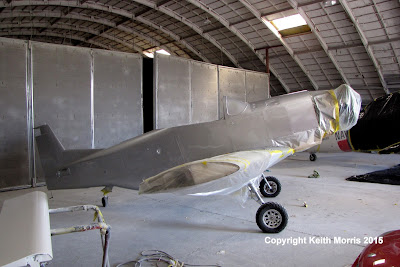 And this is the Titan Mustang that has been registered ZK-WZY since my last post on it.  It is in the paint shop receiving an overall silver coat, and it will be painted in the colours of a Mustang named "Big Beautiful Doll" which had black and white checkers on the engine cowling and represents one of the several Mustangs flown by Colonel John Landers based at Duxford in the UK.  It has been built by Pioneer Aero for an Australian owner.