A new homebuilt aircraft type was registered in July, being a Nicollier HN 700 Menestrel II. I have been following the progress of this aircraft over the last few years in Steve Chilcott's hangar at Ardmore and it is beautifully built.  It is Steve's second aircraft, following his Jodel D 18 ZK-SCJ.

The Menestrel is an old-school wood and fabric design that can trace its roots back to the original single seat Menestrel HN 433 which first flew in France in 1962.  The HN 700 first appeared in 1989. 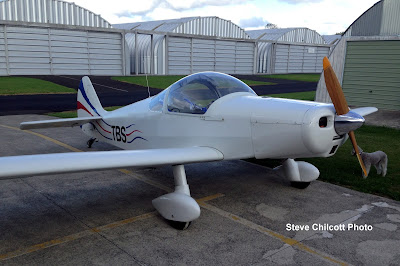 ZK-TBS (c/n 209) was registered to Steve on 7/7/15 and looks really smart.  It is registered as a Class 2 microlight and is powered by a Revmaster engine.

Thanks for the photo Steve.