Another recently registered sports aircraft is this Glasair Sportsman 2+2 that has been imported by the agents Sports Aircraft New Zealand Ltd who are based at Kaipara Flats airfield near Warkworth.  This aircraft originally appeared as the Stoddard Hamilton GlaStar (of which we have had five registered in New Zeakland - and we have one other Sportsman 2+2 and one other Sportsman Carbon Fibre)).  In 2012 the company was bought by a Chinese businessman Mr Fang Tieji who renamed the company as Glasair Aviation USA LLC 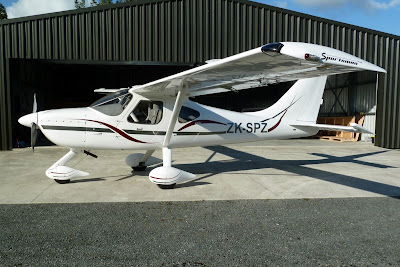 ZK-SPZ (c/n 7422) was registered to Tim Harrison of Sports Aircraft New Zealand Ltd on 30/4/15.  It arrived in the country by contaioner in early July and its fiirst flight here was on 1/8/15, flown by Tim Harrison.

Thanks very much for the photo Tim.
Posted by Sir Minty at 11:48