Thanks to John M for sharing this absolute gem!

Photo-report from Adrian M. Balch at

On 15-16th August, the de Havilland Moth Club held its 30th annual rally at in Bedfordshire, which also commemorated the 40th Anniversary of the Club’s founding by Stuart McKay.
Star of the show for many was the public debut of newly-restored DH83 Fox Moth, ZK-AGM (c/n TS2810), which only made its first flight on 3rd August from Rendcomb, Gloucestershire after rebuild by Jan Cooper and team at the Newbury Aeroplane Company, nr. Hungerford. Owned by New Zealander and Emirates Boeing 777 Captain, Bruce Broady, the Fox Moth was put through its paces at Woburn by pilot Charlie Huke. In order to fly in the , the Fox Moth has been allocated the civil registration G-CIPJ and will be temporarily based at Rendcomb before being shipped back to .
The aircraft has an unusual construction number ‘T/S 52810’ as it was originally c/n 4085, being delivered to the Canterbury Aero Club at in 1934 as ZK-ADH  and leased to Air Travel (NZ) Ltd. However it crashed near Wigram on 7th June 1936 when attempting to land in fog and was damaged beyond repair. The wings, undercarriage and tail were used with a new-build fuselage and it was rebuilt by the de Havilland Technical School, but having a new fuselage was given  a new c/n, the ‘T/S’ standing for Technical School. It was also re-registered ZK-AGM and delivered to Air Travel (NZ) at Hotitika on 10th June 1938, then to New Zealand National Airways named “Matuhi” on 1st December 1947. It had several subsequent owners, but crashed again on 27th April 1963 in and was cancelled from the register on 5th August 1963.
In 1997, the remains were shipped to the for restoration by the Newbury Aeroplane Company, and it finally emerged in early August in pristine condition.
This is an important restoration, as there are thought to be only another six airworthy Fox Moths flying in the world today, in , , and the . When ZK-AGM finally returns to , it will be based at Motueka, near Nelson on the . 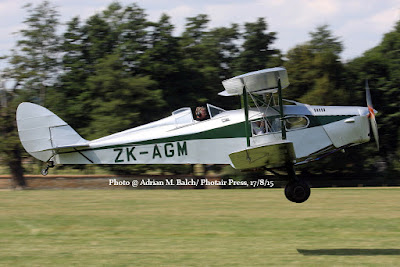 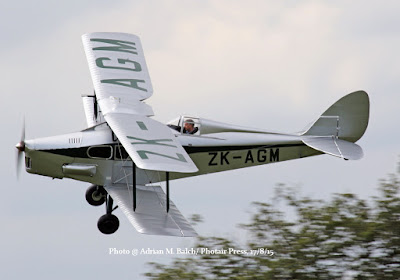