With Spitfire Mk XIV ZK-XIV now completed, Avspecs have another Spitfire well on the way to completion. 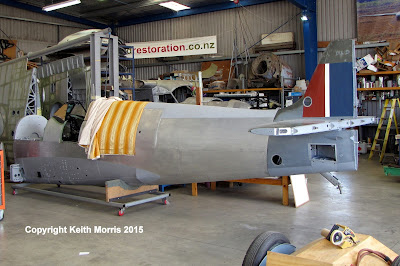 I was advised that this aircraft is a Mk XVI, with the RAF serial Number TB252.  It is being restored for Tony Banta of Livermore, CA and the projected completion is sometime in 2016.

TB 252 was displayed as a gate guardian at several RAF stations between 1955 and 1988, when it went to Historic Flying Ltd for restoration and was registered G-XVIE.  However the restoration did not progress far and it was cancelled from the UK civil register in March 2001.  The project was purchased by Tony Banta in July 2002 and registered N7252B and was then shipped to Avspecs, so it has been here for quite some time.