Our next type of homebuilt aircraft to come along was the Vans RV 6.

Richard Van Grundsven designed the RV 6 following the success of the tandem seat RV 4 (see: www.nzcivair.blogspot.co.nz/2014/01/vans-rv-4s-of-new-zealand_31.html  ).  However, many American pilots wanted a 2 seat Vans but preferred the sociability of side by side seating, hence the RV 6 which first flew in 1985.  The RV 6 used the same wing as the RV 4 and this wing was the key success factor for Vans aircraft up to and including the RV 8 - it is of low aspect ratio and uses the NACA 230 airfoil with no taper or twist.  This is a non laminar airfoil whose performance is not adversely affected by bugs or rain and has good low speed and high speed performance.  The cockpit width is 43 inches (1,100 mm) which is quite generous.  With development the RV 6 proved to be only around 3 mph slower that a RV 4 with the same engine despite the extra fuselage cross sectional area.

The original RV 6 had a forward hinged canopy but a revision allowed builders to build a sliding canopy with a fixed windscreen.  We have had both types among out RV 6s.  A later modification was a taller fin with a counterbalanced rudder to allow for better spin recovery, and this was introduced on later kits from the late 1990s.  We have had two RV 6s with the taller tail - ZK-PRV and ZK-RVX.

The RV 6/6A has been superceded by the RV 7/7A series, but there are still RV 6 kits out there being built with factory support.  As at April 2014 there were around 2,500 RV6s and 6As flying worldwide making them the most popular homebuilt aircraft to date.

We have had twelve RV 6s in New Zealand to date, as detailed below in order of registration.  All of them are still current (including one in Australia). 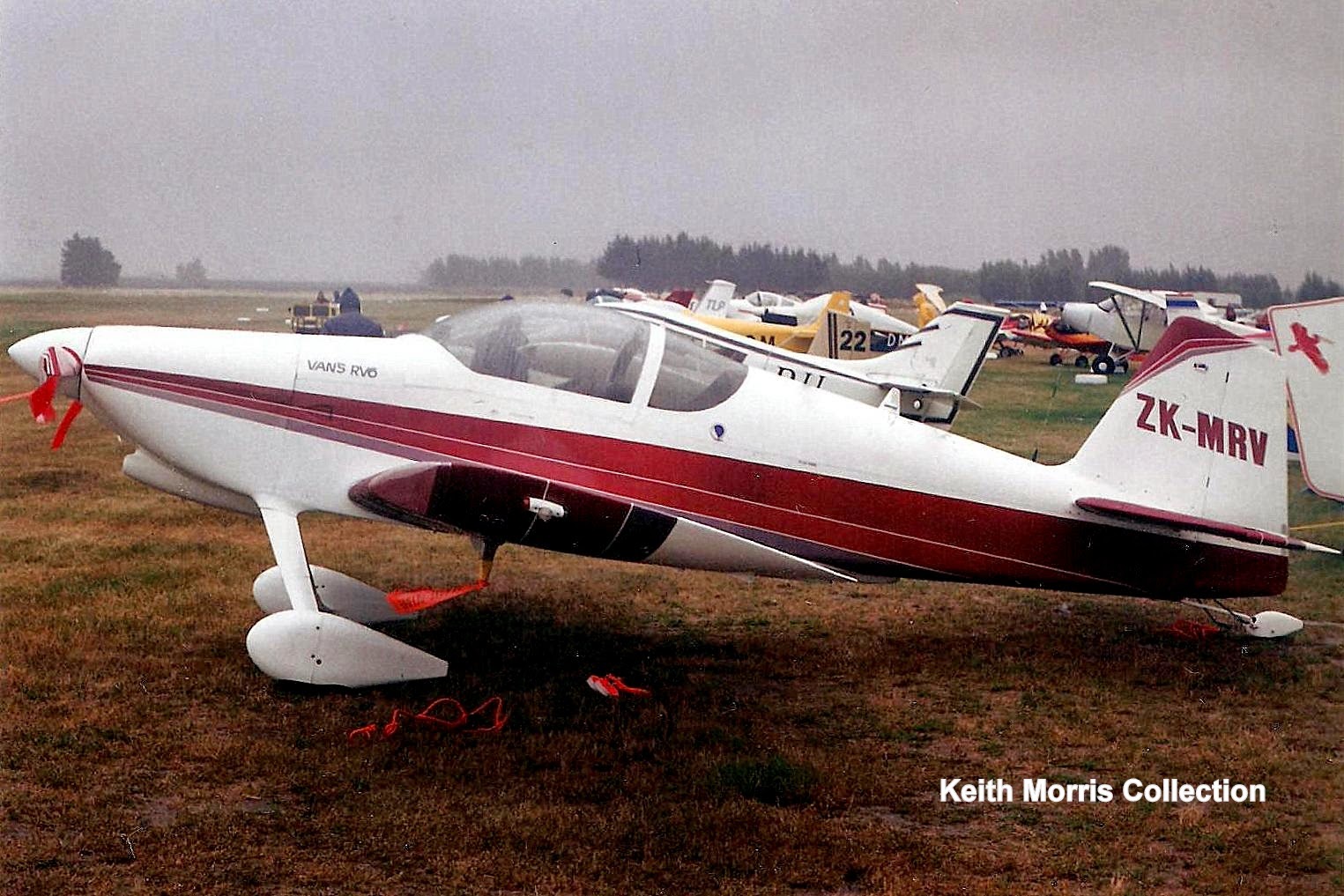 Our first RV 6 was ZK-MRV (c/n AACA 2183)which was built by James McPhee and CD Bishop of Auckland in a very short time (especially as quick build kits were not around at that time), and was first registered on 23/2/92.  Its first flight was at Ardmore on 9/9/92.  The above photo was taken at the fogged out 1993 AACA flyin at Rangiora, very early on in its life.  A Subaru EJ 20 engine was fitted in December 1997 but James experienced problems with the reduction gearbox so he reverted back to the O-320 engine. 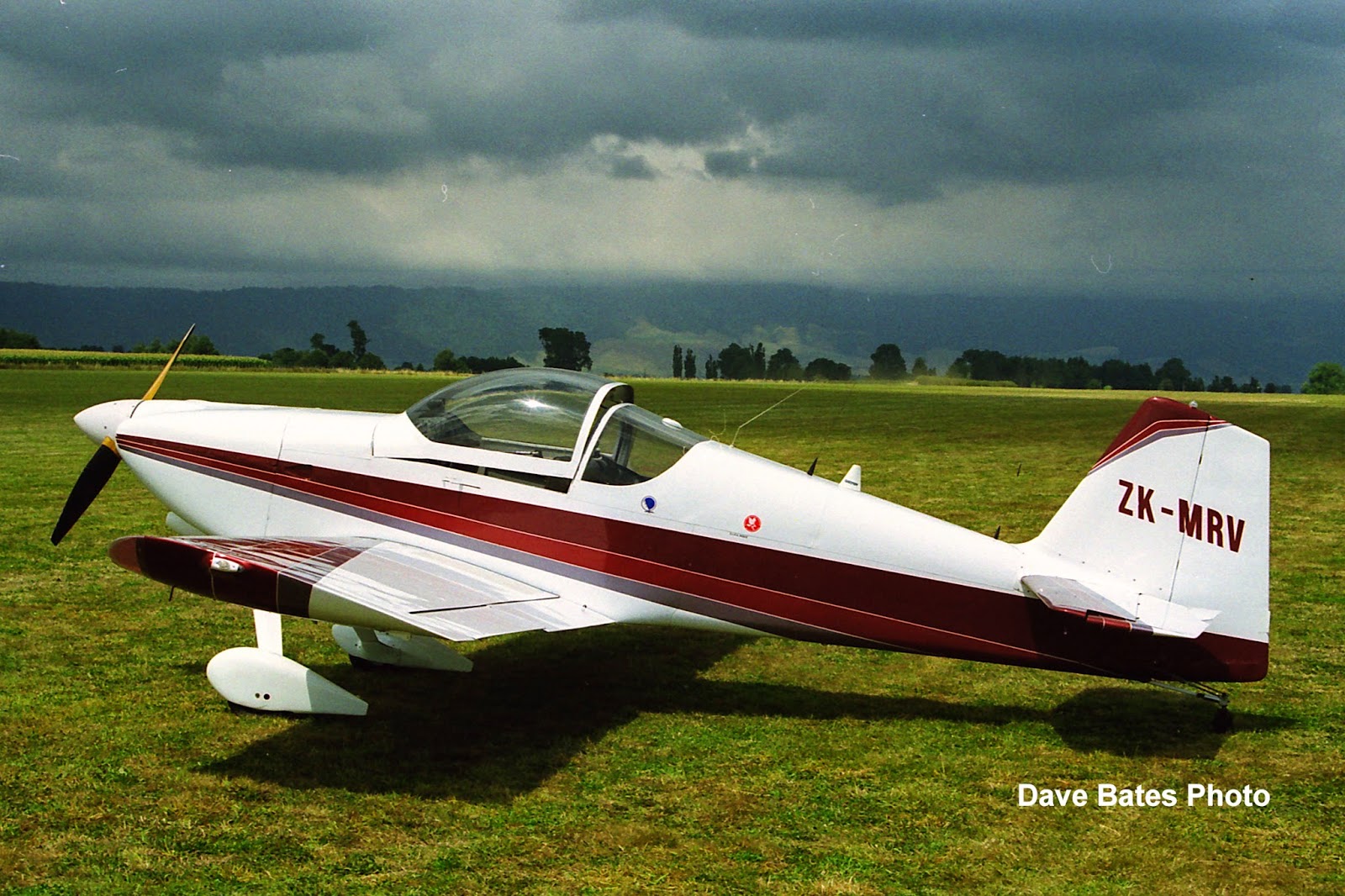 Later, ownership transferred to James P and M McPhee of Christchurch on 19/2/02 and then to Peter Bethell of Aylesbury on 18/9/02.  The above photo was taken by Dave Bates at the 2000 SAANZ flyin at Matamata on 11 February 2000.

Jump forward to 1998 when our next RV 6s appeared at the SAANZ flyin at Matamata that year - ZK-RVL and ZK-SRV (RV 6A ZK-VBC was also there as I will post later). 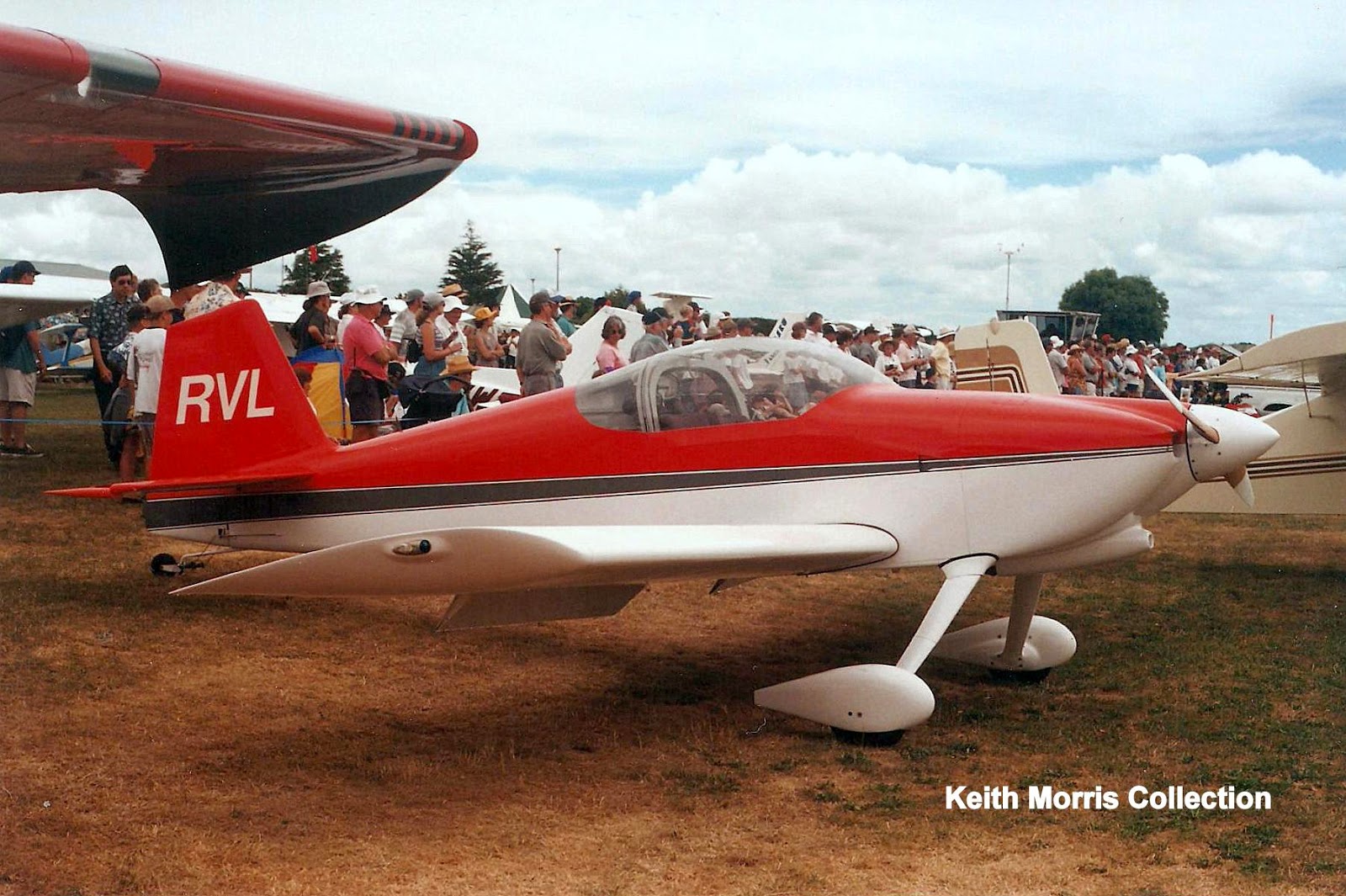 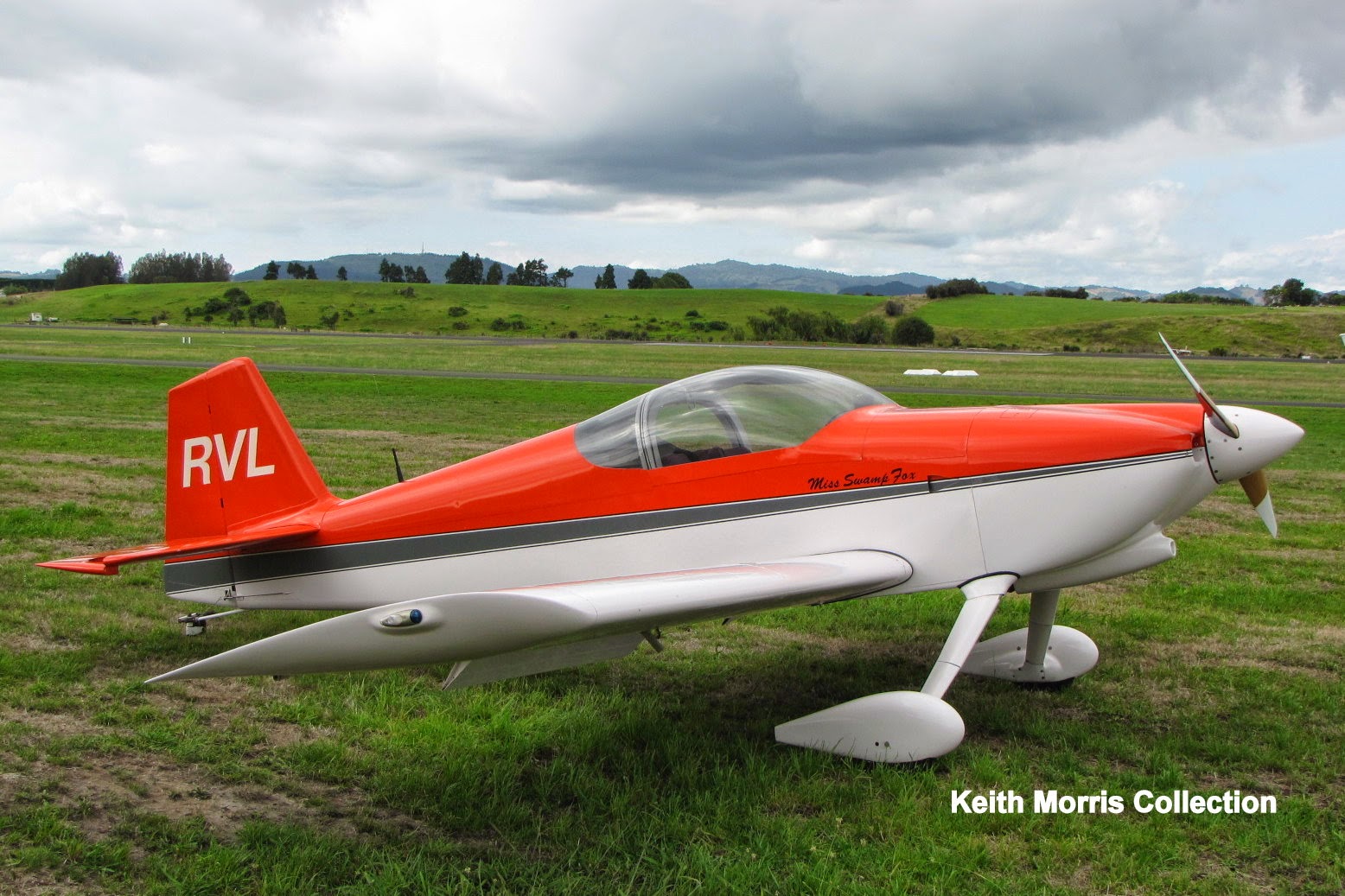 And here it is at the 2010 SAANZ flyin at Tauranga where it wears the name "Miss Swamp Fox".  It can be seen that it hasn't changed much over the years. 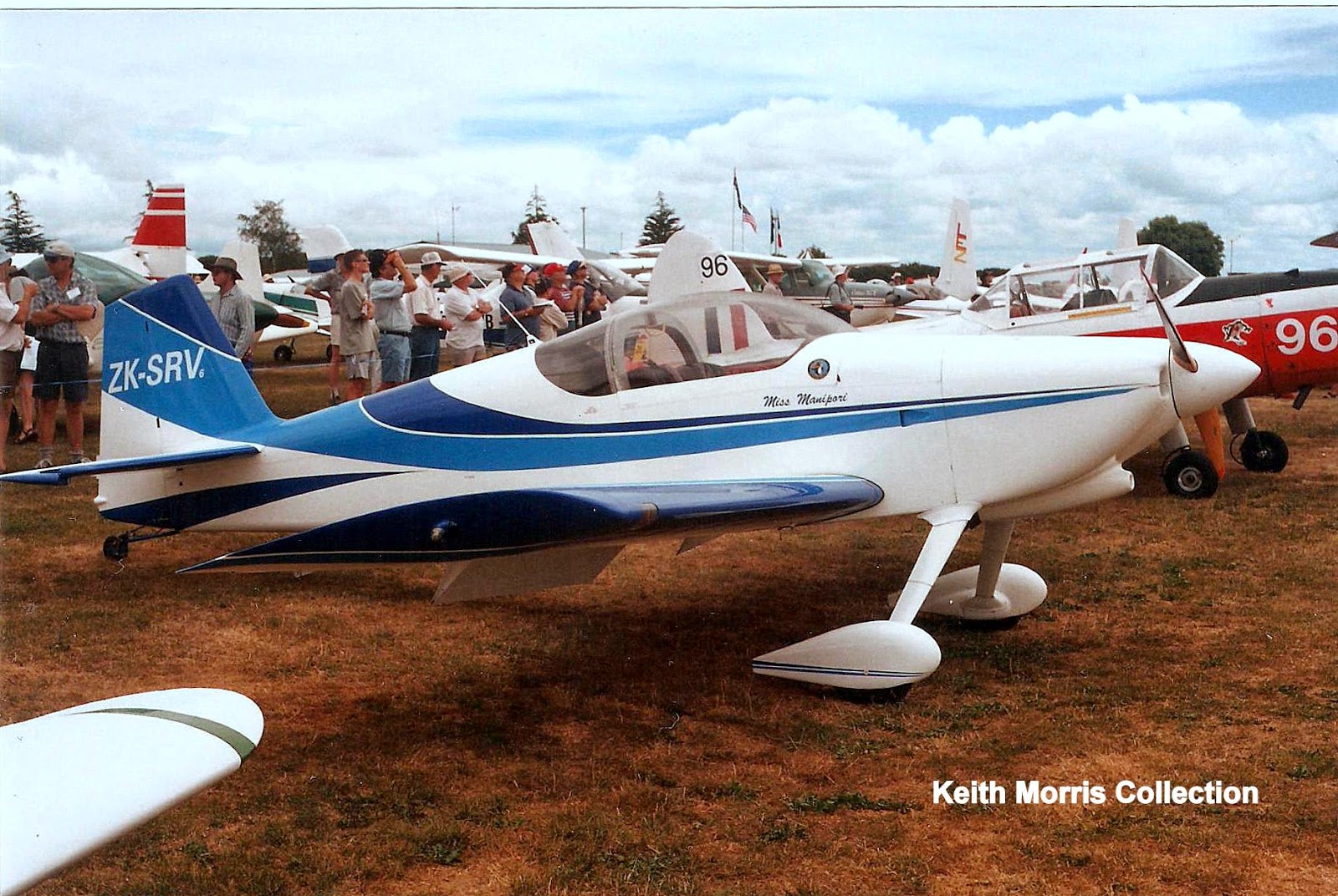 ZK-SRV (c/n 20344) was built by AS (Sam) Chatres, now of Wanaka, and was first registered on 15/3/96.  It is named "Miss Manipori".  According to Sam Manipori was the original spelling for Lake Manapouri, and it is also the name of Sam's sheep station where ZK-SRV was built.  It also has not changed at all over the years and has now flown around 800 hours. 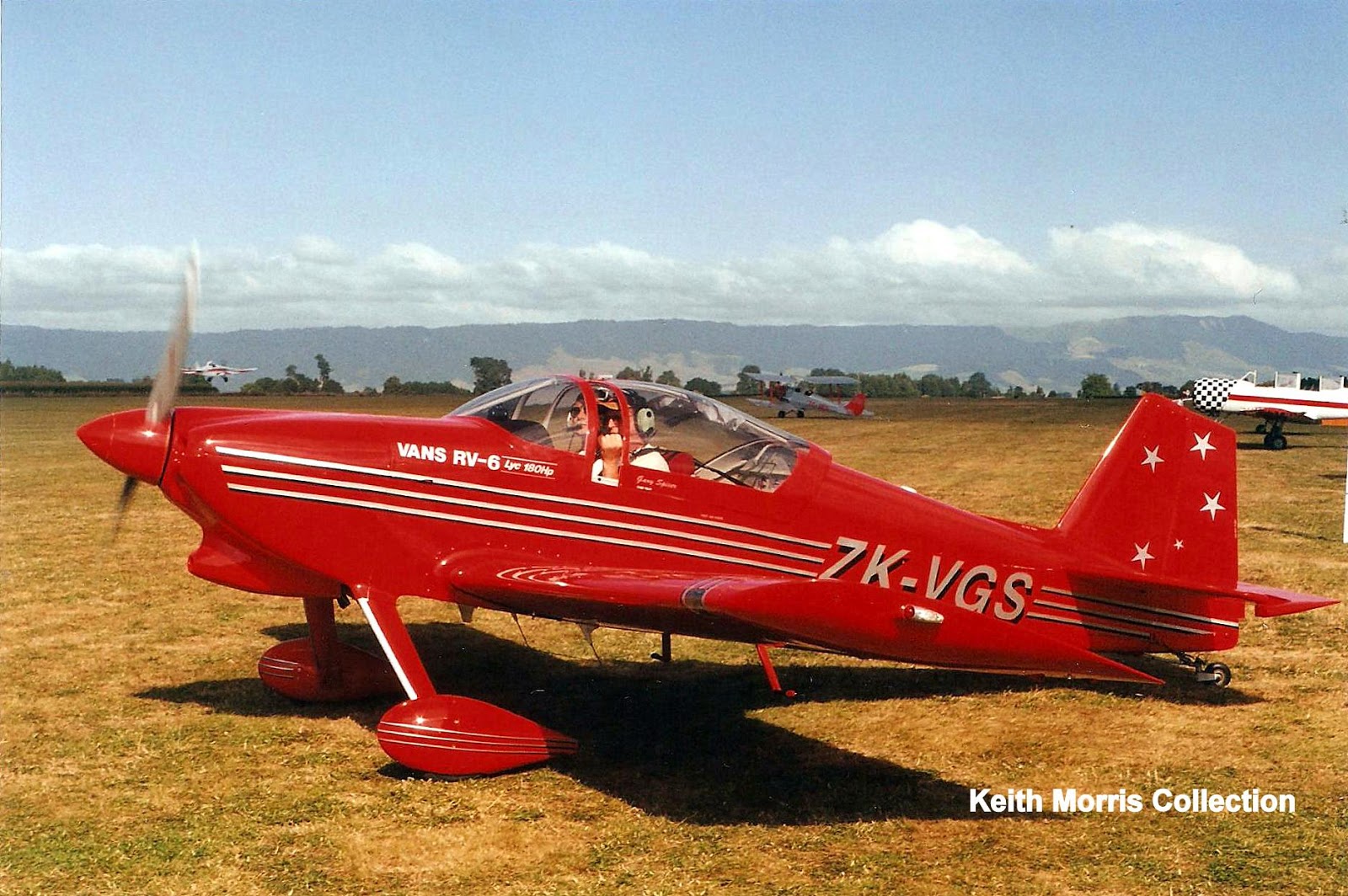 IG (Gary) Spicer had already built his RV 4 (ZK-RVS), registering it in 1991, but it was written off in a take-off accident at Ardmore in 1996.  Undeterred, Gary then built his RV 6 ZK-VGS (c/n 2514 - is there a number missing here?) which was first registered on 13/5/99, and first flew on 22/5/99.  It can be seen that it was our first RV 6 with the sliding canopy.  It is photo'd above at the 2000 SAANZ flyin at Matamata.  Gary flew ZK-VGS across the Tasman to register it VH-VGS when he moved to Australia and it was cancelled from the New Zealand register on 25/6/03.  It is still current in Australia and still owned by Gary and Sue Spicer. 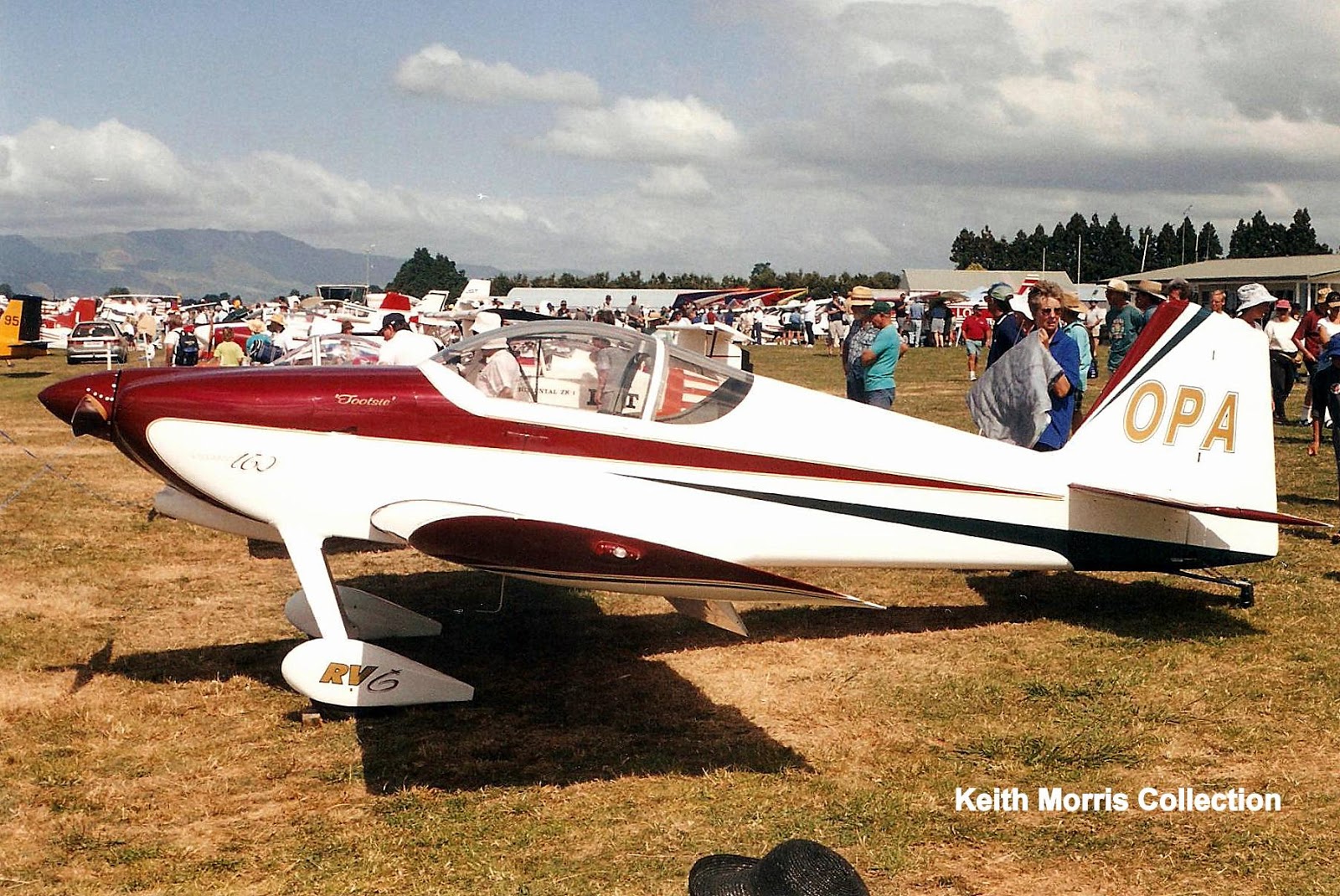 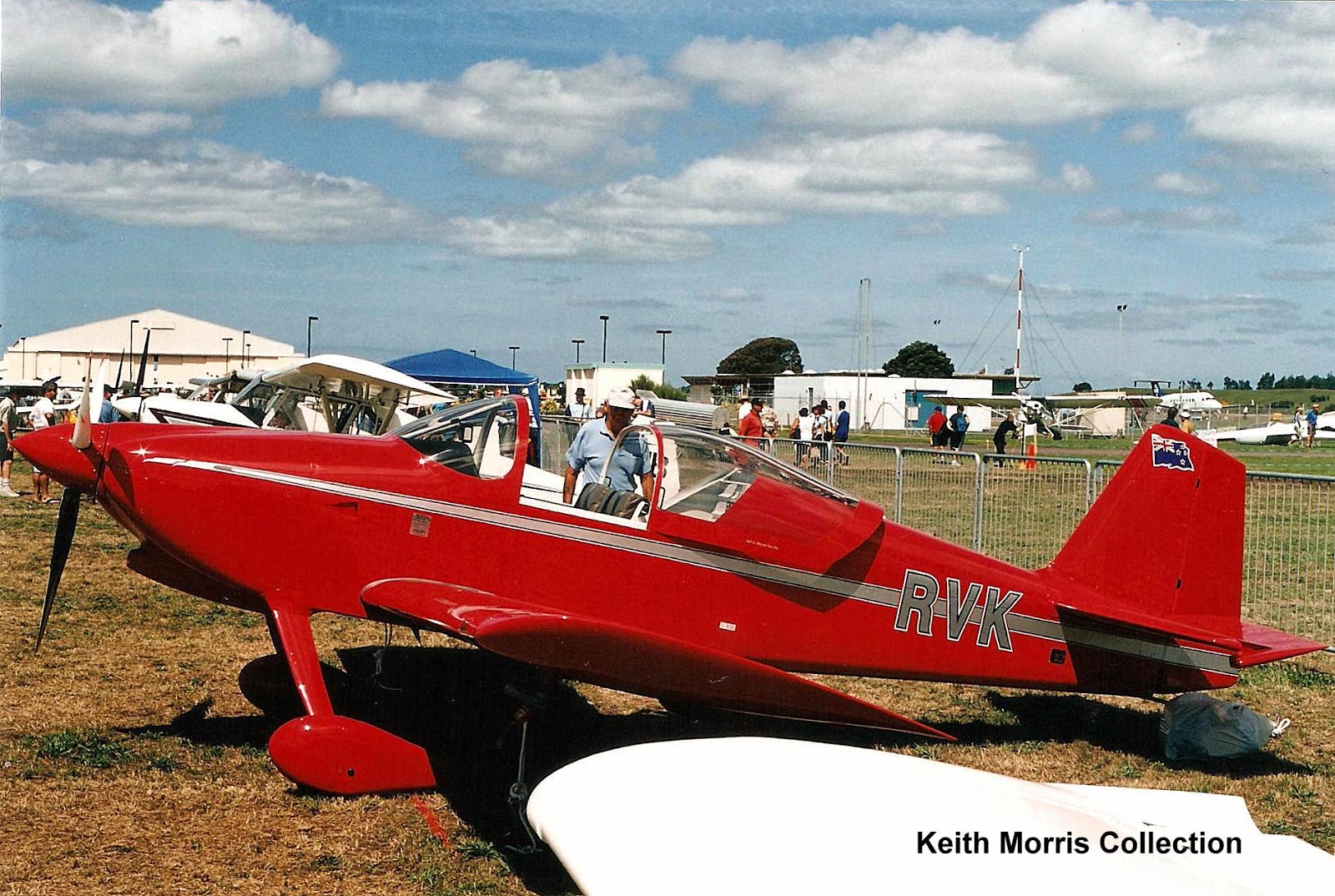 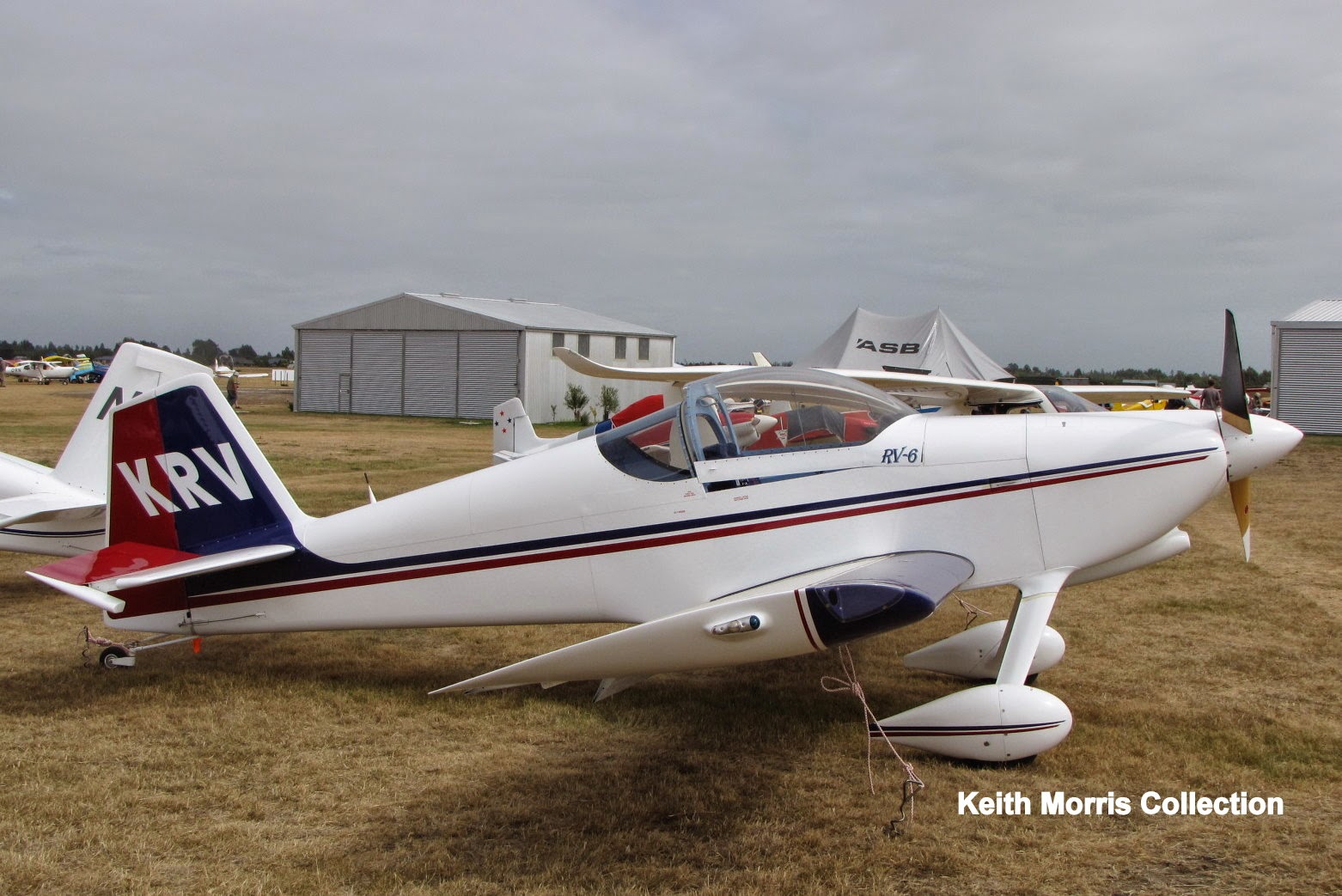 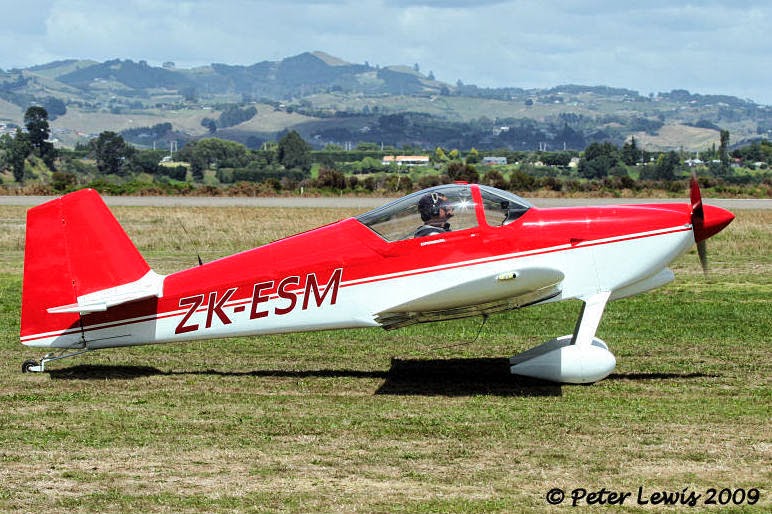 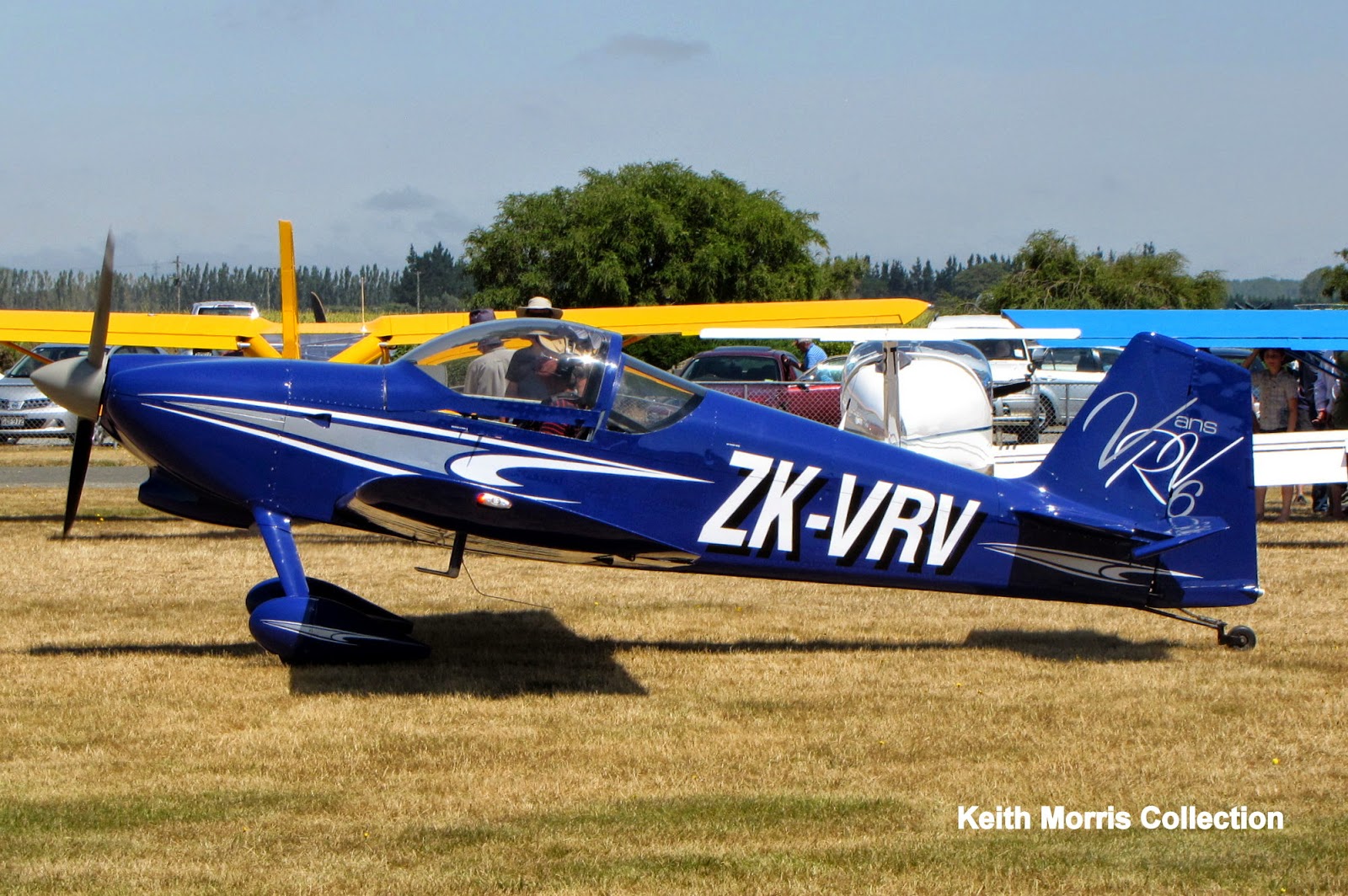 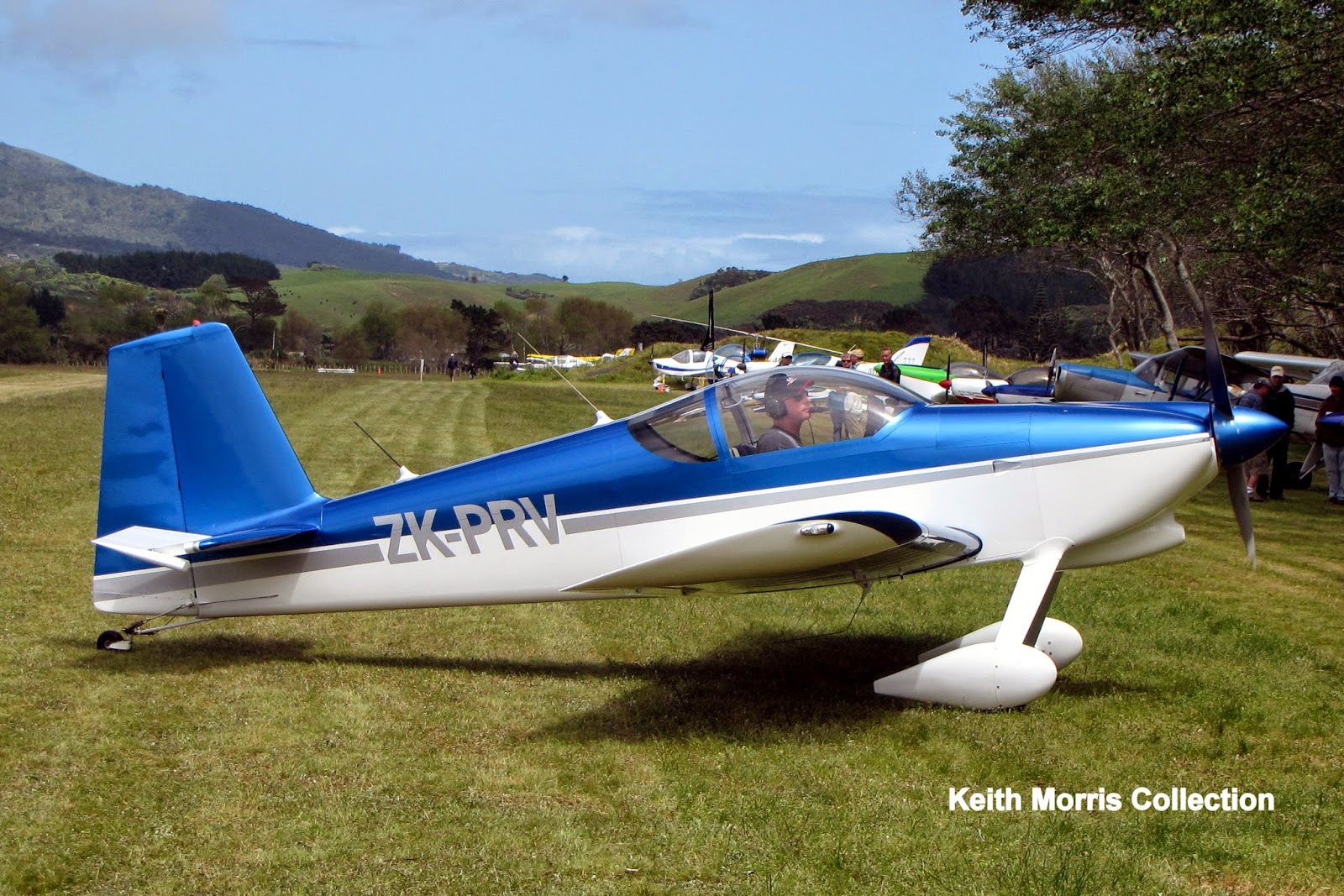 ZK-PRV (c/n 25658) was built by Kevin Paulsen of Auckland, and was first registered to him on 11/2/08.  You can see that it has the taller fin and counterbalanced rudder.  Thanks to Kevin for supplying details of this.  The above photo was taken at the 2013 Balck Sands flyin at Raglan. 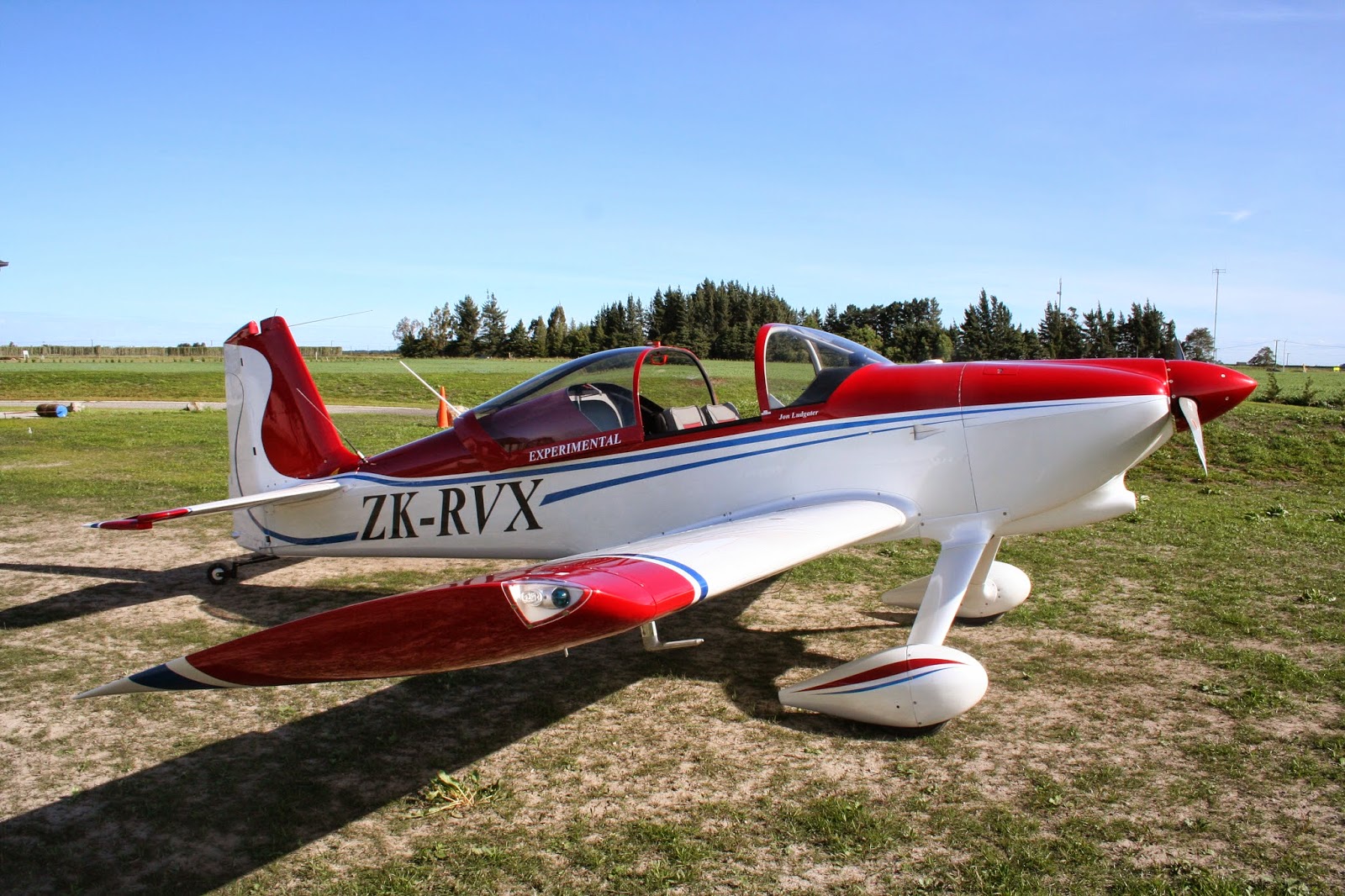 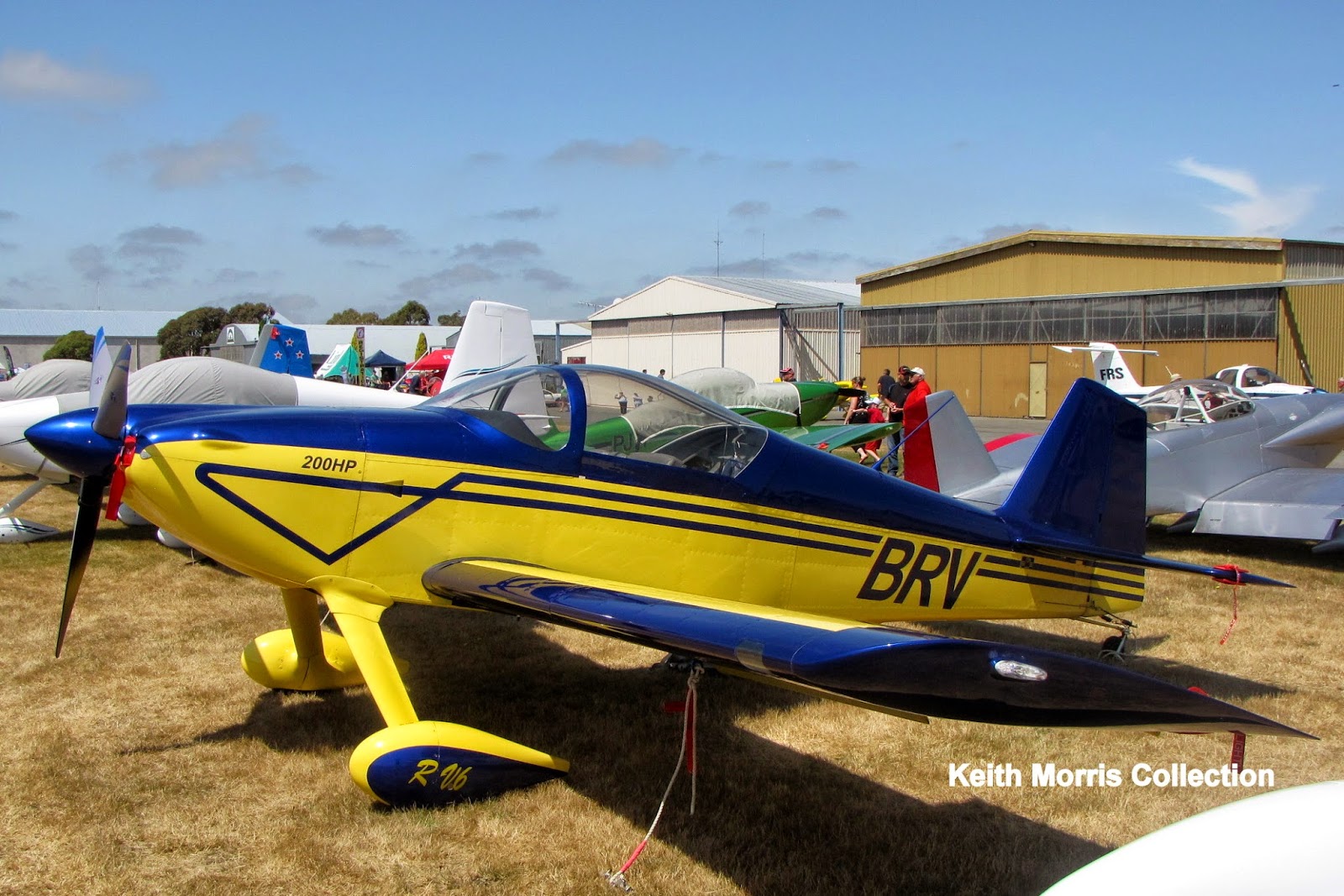 That covers all of our RV 6s to date.  I am sure that we will see more of them in the future (but we will see greater numbers of RV 7s as the RV 6 kit is no longer being produced by Vans).  I will go on to RV 7s and 7As in future posts.