This was then revisited when David Eyre sent a photo of the silver Nieuport on display at the Omaka Aviation Heritage Centre and I had another go at identifying the aircraft.  See www.nzcivair.blogspot.co.nz/2013/08/new-zealand-nieuport-24-bis-replica.html

However, recently I was perusing the book On the Wings of History (Revised 2nd Edition), which details The Vintage Aviator aircraft, and it suggested another version of which aircraft is which that made sense and that I will now post.  I really hope we have nailed it this time! 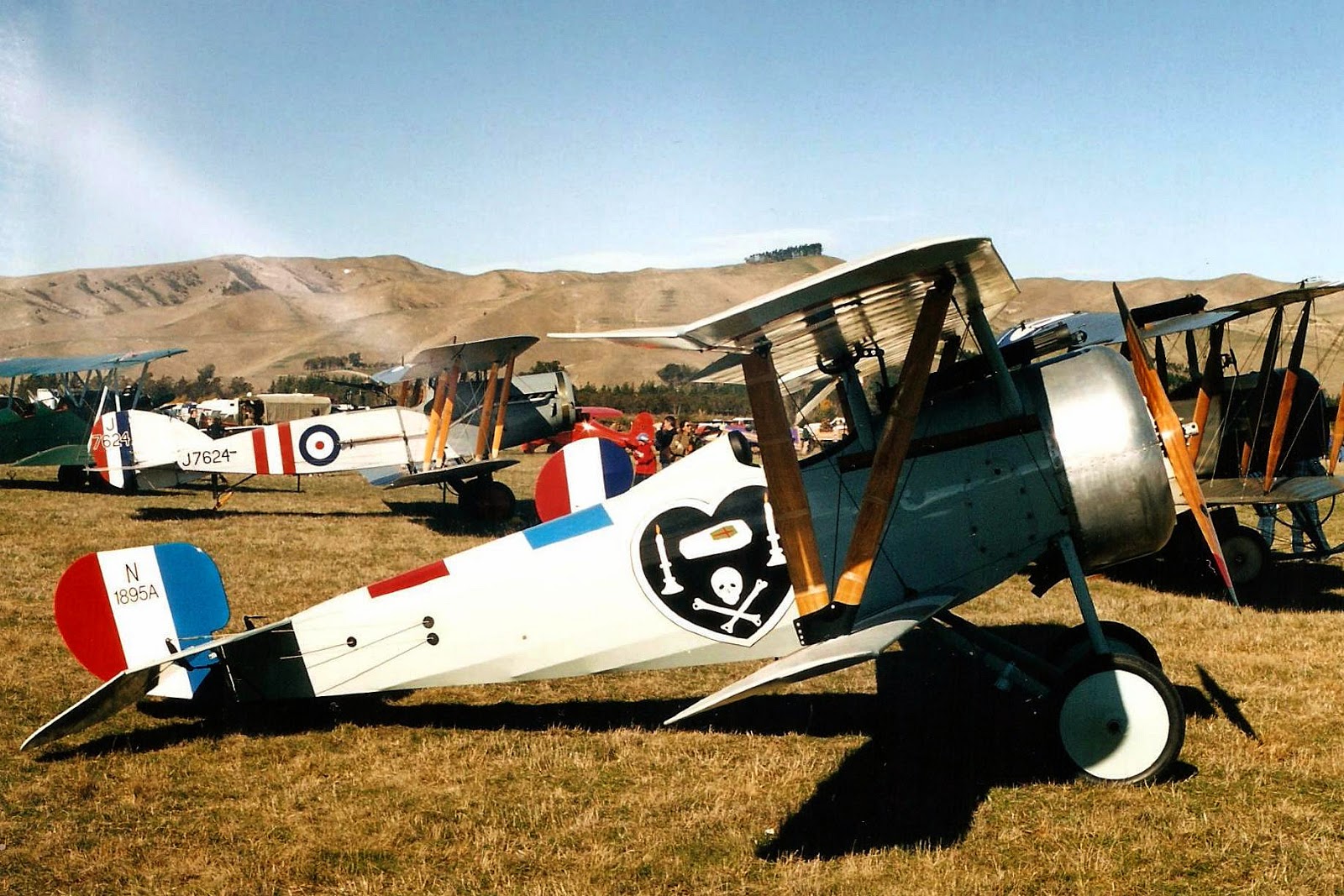 This is ZK-JOZ (c/n 001), a Nieuport 24 bis replica that was originally built by Roberto P Garcia of Spring Hill, Florida and was first registered to him on 17/4/96 as N1895A.  It had a Warner Scarab radial engine.  It was purchased by the Omaka Collection of Wellington (Peter Jackson) and was first registered in New Zealand on 7/4/03.  It is photo'd above at the 2005 Classic Fighters Airshow at Omaka with the serial number N1895A. 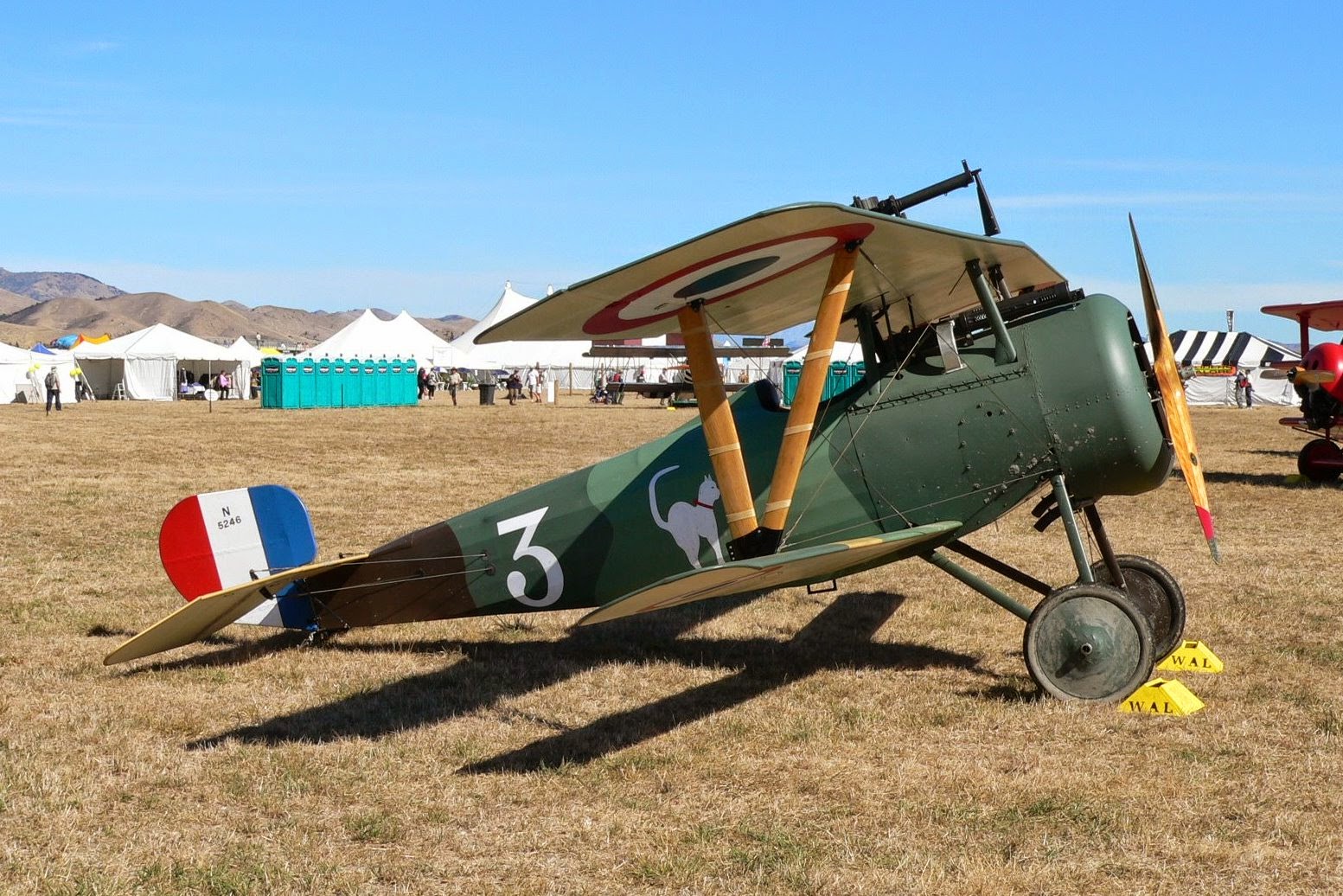 So I now reckon that this is ZK-JOZ in its new colour scheme, photo'd at the 2007 Classic Fighters Airshow at Omaka on 6/4/07.  There are several identification points with the above 2 aircraft that tend to confirm it as the same aircraft.  There is a bolted panel on the side of the fuselage behind the engine cowling on both, the bracket at the bottom of the vee-strut looks the same on both, and the propellor tip markings look the same on both.  Ownership of ZK-JOZ transferred to The Vintage Aviator on 1/7/07 and it was cancelled on 7/9/07 and sold back to the USA. 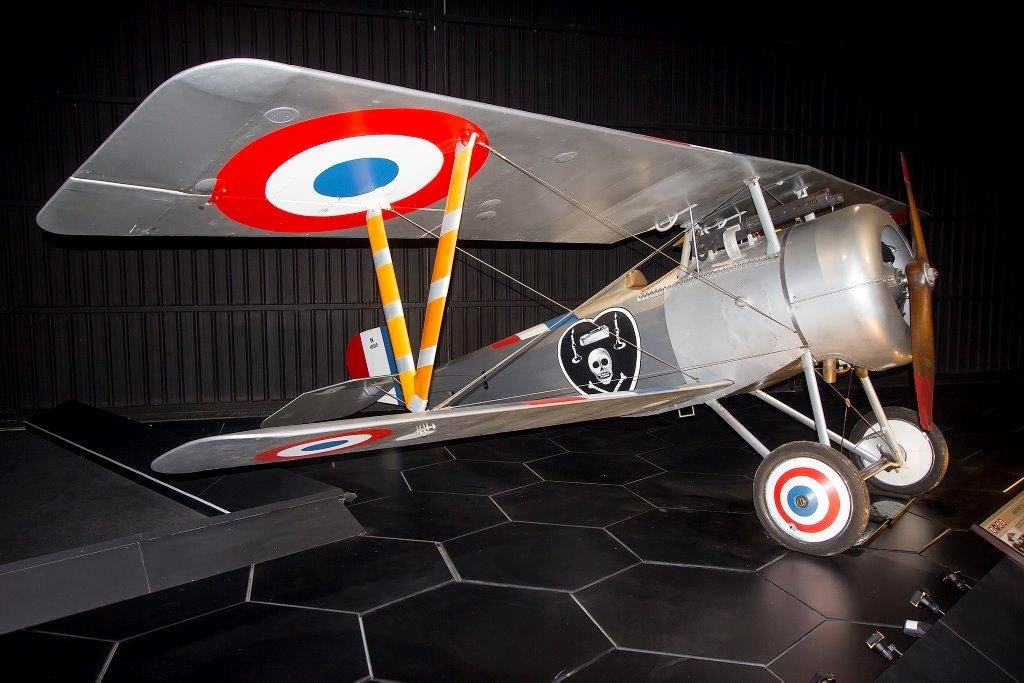 Now this Nieuport 24 bis replica, currently on display at the Omaka Aviation Heritage Centre with the serial number N1895, is ZK-NIE/2.  This aircraft was built by Paul Musso of Mt Laurel, New Jersey with a c/n of PM 7668 and was first registered to him as N1893 on 29/11/90.

It was sold to the WW1 Flying Company Ltd of Wellington and first registered in New Zealand on 16/6/05, and ownership transferred to The Vintage Aviator on 1/7/07.  It has flown in New Zealand and it is currently on the Civil Register. 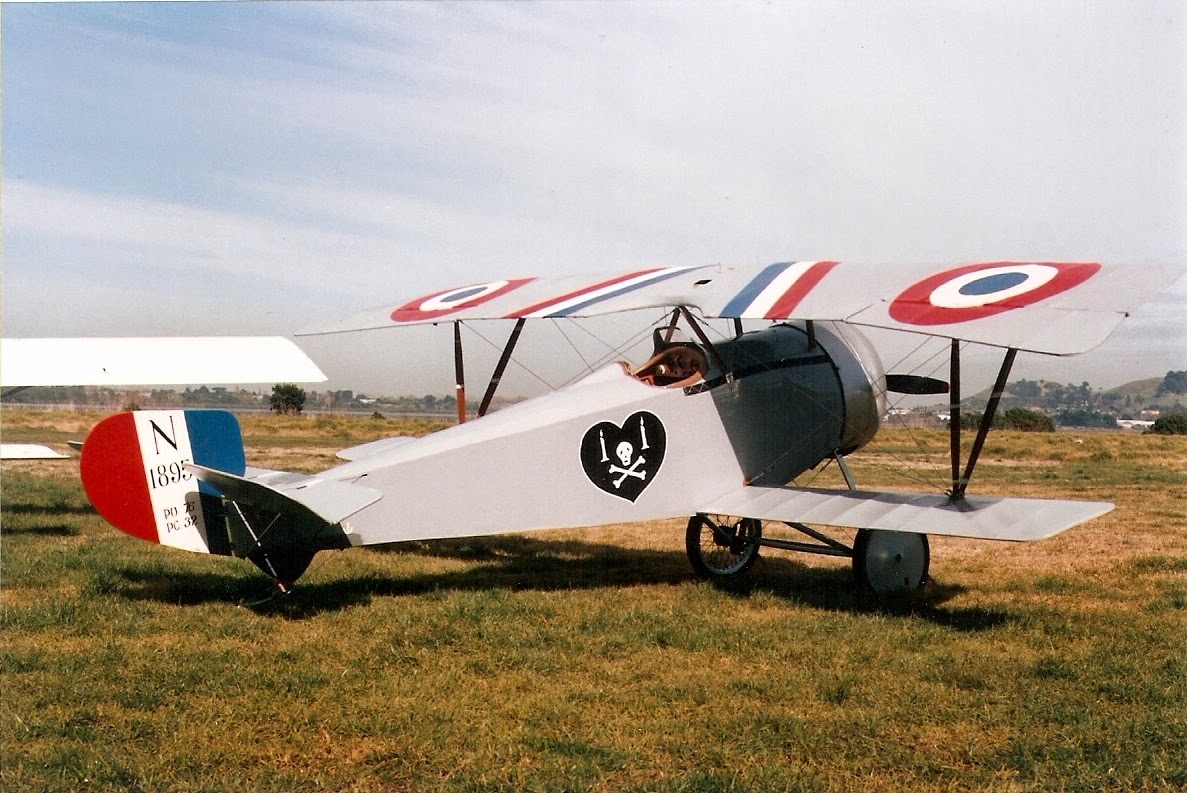 And now to clear up things a little more, this is ZK-NIE/1 (c/n MAANZ/471) which was a 7/8 scale Nieuport 17 replica built by John Lowther of Timaru, and was first registered to him on 23/3/92.  As you can see it also wore the serial number N1895.  It flew for some time at Timaru before being sold to NR Lopez of Auckland on 11/2/97.  It is photo'd above at Pikes Point Airfield in 1999.  It was cancelled on 2/8/99.  It then was sold by Turners Auctions and fell off the radar, then re-appeared in a car showroom at Kerikeri.  And most recently is has been acquired by aircraft enthusiast Colin Hay of Waimate who is actively restoring it.

I have contacted Colin Hay and found out some information about this aircraft - it was built by John Lowther from Circa Reproductions (Graham Lee) plans but the plans were only used as a basis for the build.  It is all wooden construction (whereas the Circa plans were for a steel tube fuselage), and was modified from the Nieuport 11 plans to become a Nieuport 17 replica, and it has a VW engine.  It was actually registered as a Circa Reproductions Nieuport 11.

You will notice the all of the above aircraft feature the same serial number N1895 and the same basic colour scheme with a skull and crossbones, funeary candles and a coffin inside a black heart - it is that of the French ace Charles Nungesser who scored 45 victories in WW 1.  Confusingly, he flew several models of Nieuports, all with the same colour scheme and with the same serial N1895.  The tricolour stripes on the top of the wings and on the top of the rear fuselage came about after Nungesser was attacked by mistake by an English pilot who he shot down in self defence.

And I hope that that, is that!