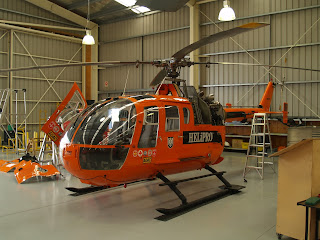 The nimble MBB BO 105 helicopter is enjoying something of a second coming here, with eight machines having joined the civil register in the last few years, and several more airframes currently stored. Soon to join them is BO 105 CBS-5 ZK-HMR (c/n S-761), ex D-HGSV out of Germany. Built in 1986 as a CBS-4 model, it flew in the US and Mexico before being updated to -5 status in 2003. Latterly, it was operated by ADAC, the German motoring organisation, in whose orange colours it will operate initially. Seen in Helipro's Palmerston North hangar yesterday, it should fly by the end of the week. Also waiting in the wings with Helipro is another machine, c/n S-656, ex 9M-SAR, and before that ZK-HSJ.