The Spencer Amphibian Aircar was designed by Percival H "Spence" Spencer.  It traces its roots back to the original Spencer Amphibian Aircar that he test flew in August 1941.  This project was put into storage during WW 2, and after the war Spencer sold the design rights to the Republic Aircraft Corporation, who marketed the aircraft as the Republic Seabee.  The Seabee had a retractable tailwheel undercarriage, and more than 1,000 were built.

In 1968, at the age of 72 Spencer and retired US Air Force Colonel "Andy" Anderson formed a new company to market Spence's new design of a 4 seat homebuilt amphibian, also called the Spencer Amphibian Aircar (Model S 12).  This new amphibian looked very like the Republic Seabee but had a tricycle undercarriage.  It was built from wood, and fibreglass.  The prototype first flew at Chino, CA in May 1970, and the first amateur built example flew in September 1974.  Over 50 homebuilt Aircars had flown by the early 2000s.

The Model S 12D used a Lycoming O-320 or O-540 engine, and the Model S 12E used a Continental Tiara engine of 285 HP.  The Tiara series of engines were developed by Continental in the 1960's, but were not commercially successful as they were not much of an improvement over the earlier standard horizontally opposed engines.  They featured a high engine speed with a 1 to 0.5 gearing to reduce propeller speeds for noise reduction. 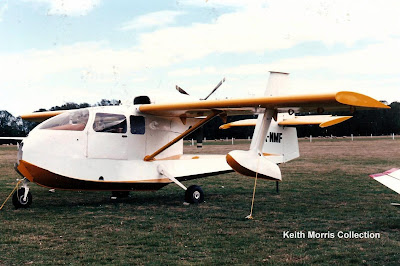 Our first and only Spencer Amphibian Aircar was ZK-NMF (c/n AACA/319) which was a Model S 12E and was built by Neil Falconer of Gore over a 15 year period from 1972.  It was first registered on 18/8/87, and I recall that Neil Falconer required dispensation from the Department of Civil Aviation for such a large aircraft.  Sadly, Neil Falconer only flew ZK-NMF for 17 hours before he died.  After that the aircraft was flown occasionally by Neil's son Keith. 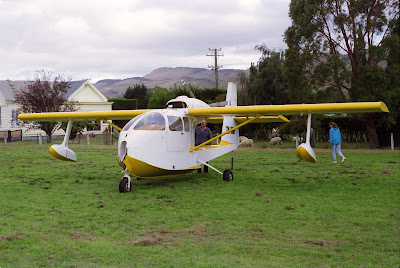 This photo of ZK-NMF was taken on 23/2/91 at Mandeville by Greybeard, and it shows the size of the aircraft.  It was withdrawn from use in 1991 and stored. 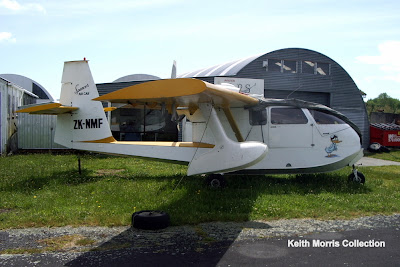 ZK-NMF was purchased by the NMF Syndicate of Kumeu on 2/7/97, and was flown around New Zealand by John Tollemanche who was a member of the syndicate.  It was sold to SAC Holdings of Auckland on 10/4/01, under whose ownership it is photo'd above at Ardmore on 4/11/06.  Finally its registration was revoked on 7/4/11.

By all accounts it was a magnificent aircraft.  However, I do not think we will see any more Spencer Amphibian Aircars built in New Zealand.