Russell Brodie from Rangitata Island has sent in the following three photographs. 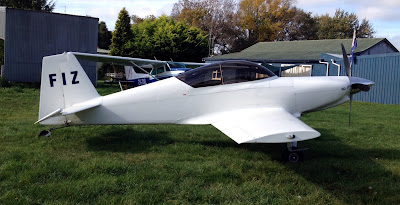 ZK-FIZ2 (c/n 173) is the Team Rocket F1 Rocket as registered to John Baynes of Gore.

An extract from the NZ Aviation News Magazine re ZK-FIZ2 said:

"The F1 Rocket has evolved from the Vans RV4 via the Harmon Rocket. Changes include a longer and wider fuselage, shorter and stronger wings and the installation of a Lycoming IO-540 engine and a three bladed Hartzell propeller. The instrument panel has an Advanced Flight Systems 3500 glass cockpit linked to an AvMap EKP IV GPS, and Becker radios. Although closely resembling the Harmon Rocket, the F1 Rocket is a purpose built kit built for Team Rocket by a firm in the Czech Republic incorporating some subtle differences. Most noteworthy is the interchangeable wing option of either the straight RV4 style (like the Harmon Rocket) or the Czech tapered wing with built in twist and fowler flaps. This is known as the EVO and is the wing fitted to ZK-FIZ. This was a quick build kit with extensive work being done in Texas before its arrival in NZ. Final assembly was by the team at Gore under the eagle eye of Peter Kempthorne. Test pilot was Ryan Southam from Mandeville. John already has the Vans RV4 ZK-RVZ and the Tiger Moth ZK-BAH, so it was a natural upward step to the F1 Rocket. The aircraft is stressed for +6 and -3g and has a top speed of around 190kts and climb rate in excess of 3000ft/min. So the registration reflects the F1 name and its peppy performance = FIZ".

Rans S6-S Coyote ZK-SGS (c/n 01071793) is the Ray Eden machine from Waimate.
This is what the NZ Aviation News Magazine said about this Rans.
"Another new Rans S-6S Coyote 11 tail dragger is the all yellow ZK-SGS for Raymond Eden of Waimate. This is interesting in that it is fitted with a 100hp six cylinder Corvair engine (I believe it the first in the world) and came together in the Mark Rollinson hangar near Waimate; with Mark doing the engine conversion including the fitting of a fifth bearing to take the propeller loads from the Brent Thompson prop." 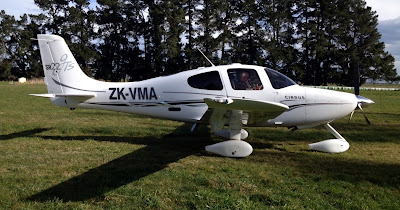