The next type of unique homebuilt aircraft in New Zealand was the Rutan Vari Viggen.  What an amazing range of aircraft appeared in 1988 - 89 with the Cvjetkovic CA 65, the Spencer Aircar and the Vari Viggen.

The Vari Viggen was Burt Rutan's first full scale aircraft design, and was inspired in part by the Saab Viggen which also featured a canard wing.  Burt Rutan was interested in designing an aircraft that could not stall, which he further developed with his later Vari Eze.  The Vari Viggen design was commenced in 1968, and it was built from wood and fibreglass.  The prototype first flew in April 1972 and it was demonstrated at Oshkosh later that same year to some amazement.  Not many Vari Viggens have been completed world wide (around 35 aircraft) as the design was overtaken by the Vari Eze.  However it sure did look different! 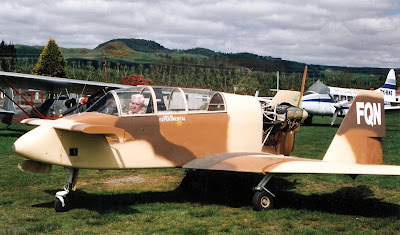 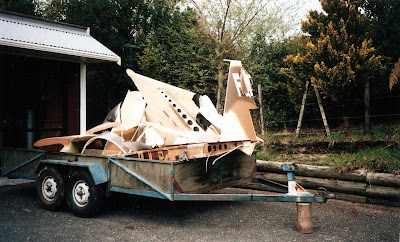 Unfortunately it ditched in Lake Rotorua on 6/10/94 when the canopy detached and went back through the propellor, which is a potential drawback of pusher designs.  The above photo shows what Des got back from the lake.  I got the above 2 photos from Des Whitfield. 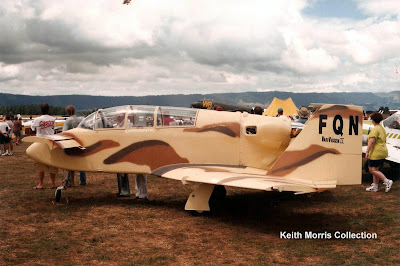 However, Des was not deterred, and he rebuilt the aircraft in a remarkable 17 months.  The above photo shows it at the 1998 AACA flyin at Matamata.  Tragically, it crashed near Lake Rotoiti on 28/8/98, killing Des Whitfield and his passenger.  It was cancelled on 27/7/99 ending a sad history.