Recent reading of a copy of the May 2013 Flypast magazine produced  a small footnote which led the following interesting information:

The RAF Museum’s Hanriot H.D.1 and Farman F.40 were due to depart from the UK for a new owner in New Zealand in late December (2012 - my note), after being traded for the Sopwith Snipe, Royal Aircraft Factory R.E.8 and Albatros D.Va reproductions built by the Vintage Aviator Ltd at Wellington for the RAFM (see cover story, October 2012 Aeroplane). Following their late summer appearances at Shuttleworth Collection shows at Old Warden, all three aircraft are now at Hendon, with the R.E.8 and Albatros on show in the Grahame-White Hangar, and the Snipe in the Milestones of Flight Hall.


The 120 h.p. Le Rhône rotary-powered Hanriot, c/n 75, (see Preservation Profile, September 1976 Aeroplane) was acquired by the RAFM back in December 1978, in airworthy condition, from Marvin Hand in San Francisco. It had been displayed at Hendon since December 1979 in the original 1e Escadille de Chasse, Belgian Flying Corps markings it wore while based at Les Moores, near La Panne, Belgium, in September 1918. The type was never operated by UK forces.

The Farman, F-HMFI, had been in storage for more than 55 years, latterly at the RAF Museum Cosford. Built at Buc, near Versailles in 1913, the aircraft was the prototype F.40, a joint design by Henri and Maurice Farman. It featured the Henri Farman type tail booms and tail section, and Maurice Farman wings, nacelle and undercarriage, the hybrid design becoming known in Britain as the “Horace” Farman. Fitted with a 130 h.p. 12-cylinder liquid cooled Renault engine, it is thought that F-HMFI made at least four flights between Paris and Hendon during 1914.  After the First World War it had several owners in France, being flown at various flying meetings until being acquired by R.G. Nash in 1936 and transported to Brooklands, Surrey, where it joined his famous Nash Collection.

The Farman F.40 was never operated by the Royal Flying Corps, although 50 examples were taken on charge by the Royal Naval Air Service. A spokesman from the RAFM stated: “From a curatorial perspective the museum is exchanging artefacts which have no connection with the history of the RAF, with ones incorporating extensive original material that significantly enhance the collection, and greatly assist in interpretation of the RAF’s early history – particularly as we approach the First World War Centenary.” 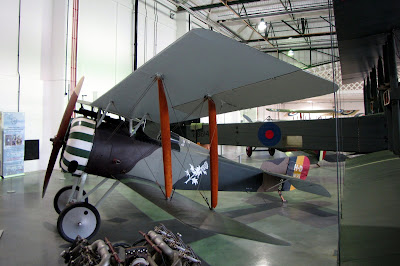 On reading this I realised that I had photo'd the Hanriot at the RAF Museum at Hendon, in September 2010, as above.

The Hanriot is interesting, but you should google the Farman F 40 - that will be something to see!