A visit to North Shore airfield on Saturday produced Wilga ZK-PZN in the Aero Club hangar. Although it has quite a history around the North Shore, this was the first time that I have seen it there.

The PZL-104 Wilga (Wilga is Polish for Golden Oriole - that must be a strange looking bird), is manufactured by CNSPL Panstwowe Zaklady Lornicze (that's why we say PZL!), of Warsaw in Poland.  It is a large 4 seater STOL aircraft that was in production from 1962 to 2006.  You can see the STOL wing features in the photo. 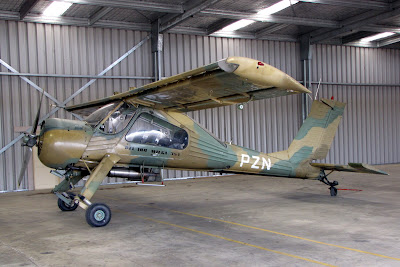 Thanks to Blue Bus for all the info!
Posted by Sir Minty at 22:02