The De Havilland DH 94 Moth Minor was designed as a replacement for the biplane Moth series, and was designed to give similar performance on lower power.  The prototype was powered by the Gypsy Minor engine and first flew in the hands of Geoffrey De Havilland at Hatfield on 22/6/37.  Around 100 were built in England prior to WW2, and the production jigs, components and unfinished aircraft were sent to the DH factory at Bankstown, Sydney, Australia, where more than 40 more aircraft were manufactured.  That makes the Moth Minor relatively rare, and with only around 140 built it never approached the success of the biplane Moth series that it replaced. 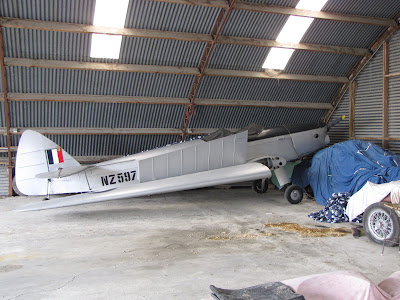 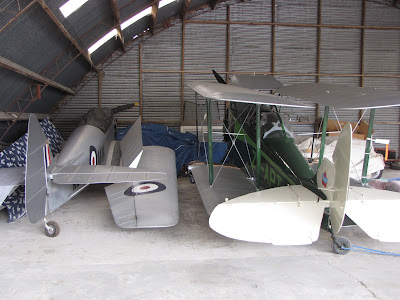 ZK-AKM (c/n 94012) has had a very long and interesting history.  It is shown here squeezed in beside Fox moth ZK-APT.  There are 4 historic aircraft at North Shore that are hangared with wings folded.  Proctor ZK-ARP, DH Dragon ZK-AXI and the above two.  All are associated with Stan and Gilly Smith. 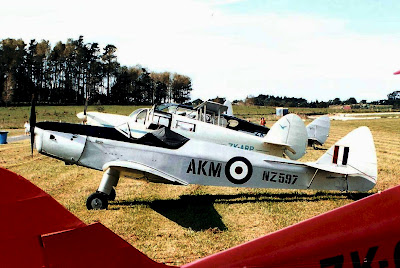 The aircraft was first registered as G-AFON to the London Aeroplane Club on 24/3/39.  It wasn't with them very long as on 26/10/39 it was registered to the De Havilland Aircraft Co (NZ) Ltd, and it was shipped as far as Australia in late 1939.  It was registered in New Zealand on 3/9/41 as ZK-AHK to the New Plymouth Aero Club and was then impressed into the wartime RNZAF as NZ 597 on 13/9/42.  It served in the RNZAF for the Communications Flight and later for 22 Squadron.
It was returned to the New Plymouth Aero Club post-war and was registered ZK-AKM on 12/11/46.  It then had many owners during the 50's, 60's and early 70's including H H Wood, C G Roberts of Tauranga (with whom it was named The Happy Wanderer), B E Smith, the Otaki and Districts Aero Club (1960), J E Moon and B J Farrell of Woodbourne, L Gatehouse, D K Lilico of Auckland and P E Thwaites and H D Kidd and R Stanley of Auckland.  It was then cancelled in 1974.

It is photo'd above at an open day at North Shore Airfield in 2001.

Earlier photos of ZK-AKM can be found in the Ed Coates Collection:  www.edcoatescollection.com/ac2/NZAM/ZK-AKM.html

Thanks again to Blue Bus for the info.