The Bygate Tiger Hawk is a completely own design by Tim Bygate who first of all taught himself aircraft design over a 2 year period while working on a North Island sheep station. He then moved to Hanmer Springs and built the aircraft over a period of 6 years at the Hanmer Forest Camp before learning to fly.  The aircraft is constructed of spruce and ply and originally flew with a 1.8 litre Subaru engine which was underpowered.  Tim then fitted a 2.5 litre Subaru and then finally a 2.0 litre Subaru with Sub 4 reduction gear.  It was built to GA aircraft standards but is certified as a Class 1 microlight. 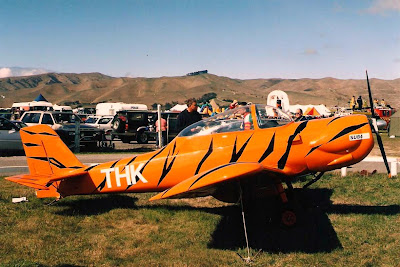 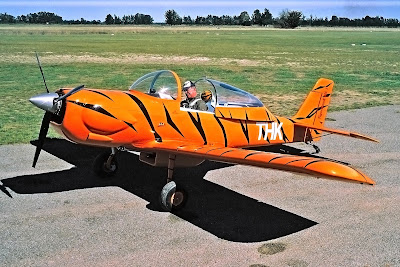 It is photo'd here by Blue Bus at Rangiora on 25/3/05, now with "Tigerhawk 1"on the rudder and with Tim Bygate at the controls.  It has attended several SAANZ flyins, and it suffered an undercarriage collapse it the 2005 SAANZ flyin at Ashburton.

However it was repaired and now is hangared at Nelson where it is also flown by Tim's dad Bruce Bygate.  ZK-THK has flown around 300 hours to date so it can be counted as a successful New Zealand homegrown homebuilt aircraft design.