This aircraft represents the final chapter in a very interesting story of homegrown homebuilt aircraft of New Zealand.  Geoff Williams of Dunedin was a cabinetmaker by profession who built his own design aircraft.  He also apparently had an aversion to officialdom as he did not register any of his aircraft, although at least 3 of them flew.   He flew his aircraft from a farm airstrip on the Otago Peninsula.

The first was a biplane which proved to be difficult to handle and was wrecked after coming into contact with a hedge.  His second aircraft was based on a model aircraft called Tom Boy and was a high wing, taildragger  monoplane which he flew quite widely afield, to at least Queenstown and Omarama.  Mr Williams failed to heed official warnings from the CAA to desist from flying the aircraft, and it is believed to have been finally grounded when CAA officials confiscated the engine.  I understand that both the Williams Mark 1 and Mark 2 aircraft were destroyed in a shed fire in the early 1980's.  There is a photo of the the Williams Mark 2 in an article by Murray Kirkus in the Winter 2011 edition of Sport Flying magazine, and I have based my comments on this article.  Mr Williams built a third aircraft but it was apparently never completed.

Does anyone have any photos of the first 2 Williams aircraft? 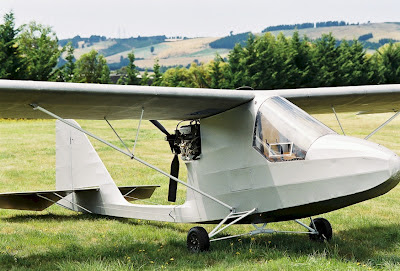 Which brings us to the Williams Mark 4 shown in the above photo.  It can be seen that it is a high wing microlight design with a pusher Rotax 447 engine.  It first flew in 1991 and it apparently flew around 160 illegal hours.  It was acquired by Bob Gibson of Mosgiel in 2002, after Geoff Williams' death, and he refurbished the aircraft and registered it as ZK-JPA (c/n 001) on 25/2/03.  Finally it was sold to M J Nicholson of Otautau on 11/5/04, with whom it is still current (and it has a registration painted on the tail).

Thanks very much to Bob Gibson for the photo.