Jean210 has very kindly sent in these three photographs of Fletchers seen at Long Beach, California, in the early 1980's. All three are in spray configuration. 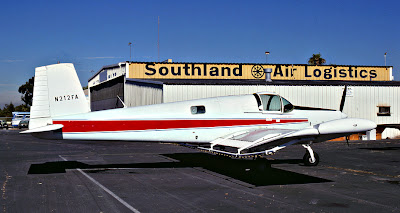 The N.Z.A.I Fletcher FU24A 950 with the construction number 240 was built at Hamilton and initially listed as ZK-EGR to NZAI Ltd on 12-07-1977. It however was not completed as such and it was re-registered on 16-09-1977 as ZK-USA, still with NZAI at Hamilton.
The photo below shows ZK-USA at Hamilton in November 1977 with the long range tank fitted in the cockpit, and comes from the CMM collection.

It flew out from Hamilton and spent the night of 18-11-1977 at Norfolk Island; moving on to Nandi the following day; and then on to points northeast. It was destined for display at the US National Agricultural Aviation Association Convention.
Below is a small clipping from Flight International dated 19-11-1977.
WHEN the National Agricultural Aviation Association convention opens at Las Vegas, Nev, on December 5, New Zealand Aerospace Industries will be among the exhibitors with the current Fletcher FU-24-950. The aircraft will be ferried over by Aerospace chief test pilot Cliff Tait and will have its spraying equipment installed on arrival in the United States. Fletcher will make a sales tour following the three-day convention and will be sounding the market for its forthcoming Cresco turboprop version of the FU-24, now under construction.

Another pic can be seen here :- http://www.airport-data.com/aircraft/photo/319812.html

Above is N4917Q c/n 240 taken in February 1982, with some real nice background airframes !
My next reference mentions that this Fletcher was written off when it struck a tree on 26-09-1982 in Mexico.

It later went to YV-426A with Fumigadores Aereos, Los Condores.
Thanks to Jean210 and RJD for details and pics.
Posted by Dave Paull at 21:46