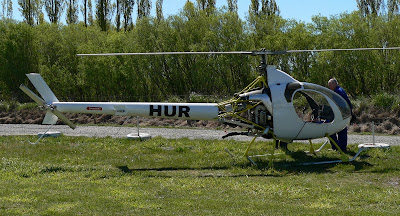 A big day for Rotorway Exec ZK-HUR3 on 11-10-2009 when it did a few short hop/skips to test the cooling system.
This Rotorway was imported into NZ in early 2007 by Bruce Burdekin.
Originally built from a kit and certified as a Neisingh Exec to Orville Neisingh of Vacacille, California with the N42830 rego on 24-02-1992.
In November of 1996 it went to Tom Taylor who partially dismantled it with the intention of converting it to turbine power. This was not completed.
Bruce purchased it but when it arrived in NZ, it was found to be not quite what he hoped. Considerable part replacement and time has been expended to get this project to its present stage.
Posted by Dave Paull at 15:46