A flying visit to Christchurch this afternoon caught the new Beech 200C Super King Air ZK-FDR2 , c/n BL-31 , about to be eased carefully into its hangar. There is not a lot of room to spare in both height and wingspan. This aircraft arrived in NZCH mid last month as VH-KFN and first flew as ZK-FDR on 01-10-09 and carried out its first official duty today. It is an ex R.F.D.S aircraft from West Australia.

Its hangar mate (below) is this Cessna 441 Conquest II ZK-NFD2 , c.n 441-0141 . I assume it has become the back up machine. The previous back for NFD was the Cessna 421B Golden Eagle ZK-KBF , c/n 421B-0943 , which in now in Nelson.
All three aircraft are registered to Garden City Helicopters and operate as the NZ Flying Doctor Services. 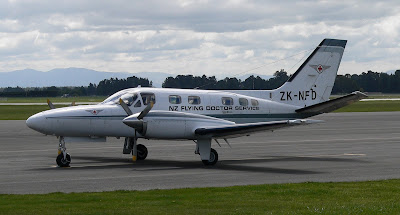 Also noted : parked in an unusual spot towards the end of "29": was the General Dynamics Allison Convair 340/580 ZK-KFJ. It is normally parked on the Air Freight pad north of the main terminal buildings.