Above pic shows ZK-CUA in its factory red & white colour scheme , at the old Canterbury Aero Club hardstand on 13-10-1968, about where part of the car park is these days, with the Operation Deep Freeze hangar and a couple Hercules behind.
Below. ZK-CUA as seen on 19-12-1970 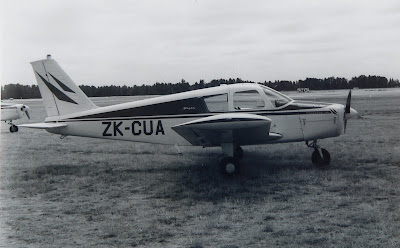 Bruce Evans, Alastair (sp?) and Chris Bell acquired it in February of 1979 and it was later leased back to the Canterbury Aero Club where Chris was the CEO.

With the relatively recent arrival of the new glass cockpit Archer and Warrior's it became surplus to Club requirements so was listed with Airfarm Partnership (the Bells) on 17-03-2009.

In their generosity the aircraft has been released to the Ashburton Aviation Museum - providing it does not fly again. The aircraft was flown to Ashburton in April and flew for the last time on 08-08-09. To help cover costs most useful lifed items have been exchanged with time expired items with the Club. Also the Club has offered to have the aircraft repainted in its original red and white Club colours and this process has already started with the aircraft being worked on at Ashburton. See pic below. I believe it has only about 17,000 flying hours, not a great deal for a 42 year old Cherokee. 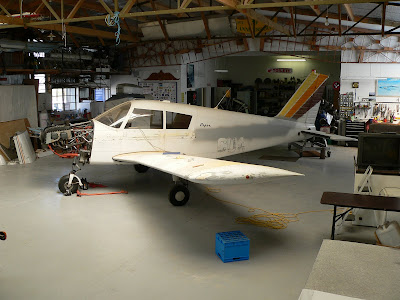 The first Piper PA-28 Cherokee flew on 10-10-1960 and to celebrate fifty years of these slab wings the Ashburton Aviation Museum is holding a Cherokee weekend over January 14-17-2010.