OE to the land of the rising sun. 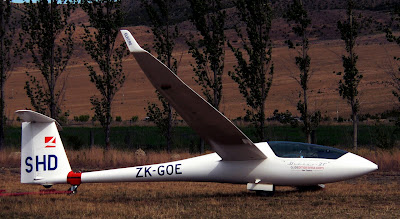 Having just been issued with its export C of A is the Schempp-Hirth Discus-2T ZK-GOE2 , c/n 23/159 . It is off to Japan for the pilot who has been coming to Omarama to fly it for the last couple of years. This is possibly Shojiro Hotta whom I have as a previous short term owner.
The Discus 2T is in the 15m class and has a two cylinder Solo sustainer engine (ie, not sufficient grunt for self launching).
It was initially registered in Australia as VH-SHD (hence the SHD letters on the tail) and was with the Waikerie Soaring Centre P/L in South Australia from 17-12-2002.
In NZ it became ZK-GOE2 for Glide Omarama from 19-12-2005.