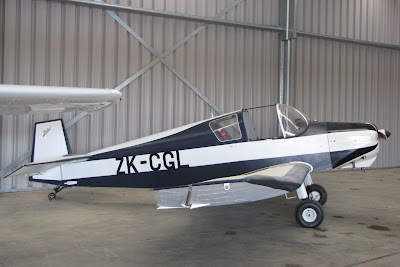 A visit to North Shore Airfield at Dairy Flat this afternoon produced some interesting local aircraft. The first one was this Jodel D 112D ZK-CGL which is owned by T J Maynard of Kaukapakapa (which is nearby). This is the first time I have seen this aircraft even though it was first registered on 30/3/04. The Jodel D112 is a factory built version of the D 11 which is still the most numerous type of homebuilt aircraft in New Zealand. The aircraft was imported from the UK where it was G-BCGL (hence the NZ registration). 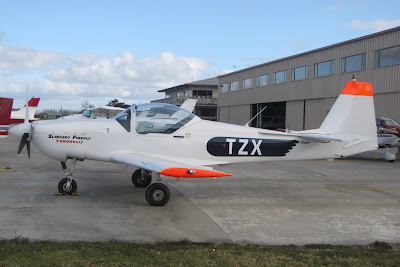 The next sport aircraft of interest was this Slingsby Firefly ZK-TZX which is owned by the North Shore Aero Club, having been first registered to another North Shore owner on 3/4/07. This aircraft was also imported from the UK where it was G-CBHE. 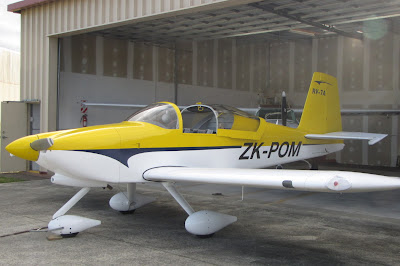 Over on the other side among the private hangars nothing much was happening except when Cessna 210R ZK-KWI arrived, Vans RV 7A ZK-POM was pushed out of its hangar so the 210 could be put away. This RV 7A also has a UK connection as its constructor/owner B J Cain of North Shore comes from the UK (also hence the registration). 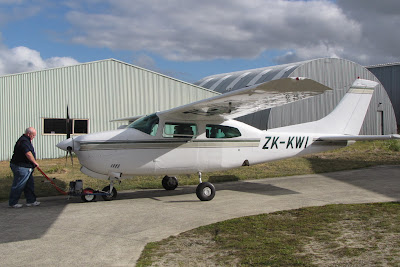 And here is ZK-KWI being put away - note the neat little electrical push/pull trolley attached to the front wheel. This is very necessary as the 210 is a heavy aircraft and there is quite a slope up to the hangar. This aircraft has been owned by Unicab Marketing of North Shore since 22/6/05, when it was imported from Australia where it was VH-FSC. You can just see a large pod under the starboard wing which houses a weather radar. The owner reckoned that this model of 210 was the nicest ever built. It sure is a nice looking aircraft. 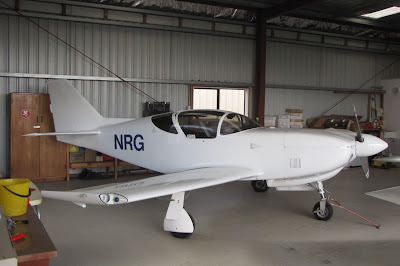 And finally, Stoddard Hamilton SH 2RG Glasair has very recently been bought by B M Williams of North Shore. This aircraft was built by G J Laird and was first registered way back on 18/1/90. This is not the first SH2 Glasair to be based at North Shore - Brian Hore's fixed gear version ZK-REH was also based at Dairy Flat for several years before it was sold to Australia as noted on this blog.