Another Teenie Two in New Zealand? - Not This One! 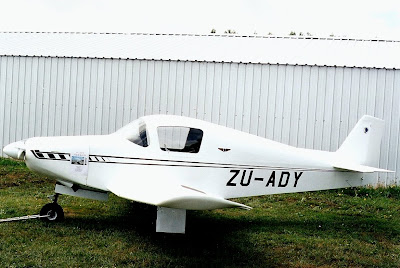 While I was researching for my previous post, I posted that the identity of this aircraft ZU-ADY that I photographed at the 2002 SAANZ flyin at Matamata as a Teenie Two. I have since found out that this is not a Teenie Two (thanks to ZK-CKE for this info - see comments attached to this post), but is an original design in wood that was also imported into New Zealand from South Africa and is now stored in Hamilton.

In my previous post I mistakenly thought that this ZU aircraft was the ZU registered Teenie Two that is now owned by Mike Wilkins and stored at Matamata. In fact they are 2 different aircraft, both imported from South Africa.

Mike's Teenie Two was built by Johan Brink in South Africa where I understand it completed one test flight. Johan brought the aircraft to New Zealand. Mike also owns RV 3 ZK-PMH and Corby Starlet ZK-ONE, and says he has a registration reserved for the Teenie Two.

Can anyone supply any further details about either of these aircraft?
Posted by Sir Minty at 19:58