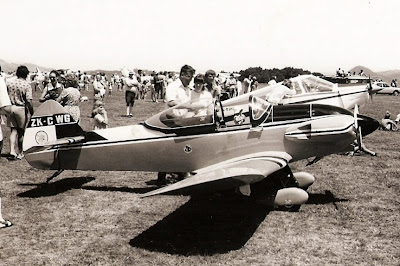 I noted with sadness in the Winter 2009 edition of Sport Flying magazine that Greg McNicol had died, and I thought I would post the aircraft that Greg built in memory of him.

I didn't know Greg very well personally, but he was a stalwart of the early Amatuer Aircraft Constructors Association (AACA) that was the forerunner of today's Sport Aircraft Association of New Zealand (SAANZ). Greg was one of the earliest members of the AACA with a membership number of 43 and he was the secretary of the Association for many years, when Merv Meredith was the president, and the Hawkes Bay Chapter of the AACA was very active.

Greg built 3 aeroplanes and had also nearly completed a fourth, being an improved Protech, which I understand will be registered ZK-WMW. All of his aeroplanes were AACA Grand Champion award winners, which is a great achievement.

Greg's first aeroplane was the Taylor Monoplane ZK-CWG (c/n AACA 43/1), that first flew in February 1971. It is photographed here at an AACA flyin with Greg and Merv Meredith standing behind it, and with Merv's Minicab in the background. It was painted a very snazzy scheme of orange, black and white. In this photo it has an extended nose cowling after Greg fitted a Revmaster engine. 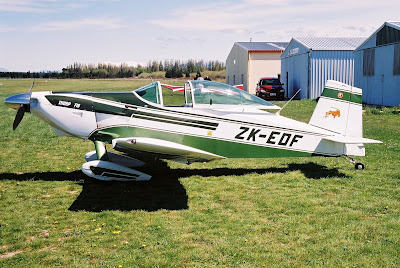 Greg's next aeroplane was the Thorp T 18 ZK-EDF (c/n AACA 43/2), which was the first of its kind in New Zealand, and first flew in November 1976. I remember that it was the fastest homebuilt aircraft in New Zealand at the time. Thanks to Blue Bus for this photo. 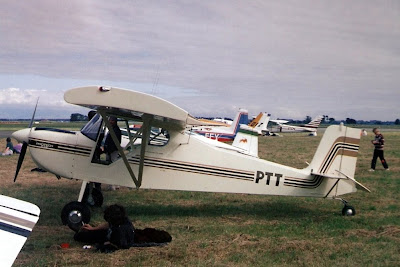 And finally, Greg built this Protech PT2 ZK-PTT (c/n AACA 43/3), which first flew in July 1991. I remember that the Protech PT2 was reckoned to be a great Cessna 180 replacement type by the guys in Hawkes Bay, and 3 of them were built and flown there (ZK-PTS, ZK-PTT and ZK-PTU).
I guess there will soon be another one and ZK-WMW will always have Greg McNicol as the central part of its registration.