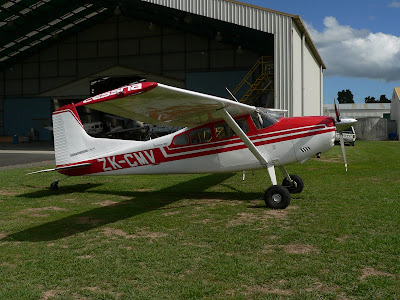 The earlier blog covering ZK-JPM and ZK-CES mentioned that Cessna 185B Skywagon ZK-CMV is a replacement for Paul & Kate Macdonald & Tilmac FamilyTrusts. This prompted me to dig out these pics. Above is ZK-CMV2 as spied at Hamilton on 23-02-2009 - the day before it was officially listed to Paul & Kate etc.
Built I suspect late in 1962 it went to Lae in PNG as VH-CMV from 17-01-1963. by 1968 it was in Queensland and some eleven owners later it was at North Adelaide with Tasco Aerial Spraying. It was ferried through Norfolk Island to Auckland, Palmerston North and Wellington on 26-04-1993. The following day it passed through Kaikoura, Christchurch and into Taieri where it was registered to Airflite South on 15-05-1993.
In 2005 it got a Texas Skyways conversion which includes a Continental IO-550 engine and a Hartzell three blade prop and modified wing tips. 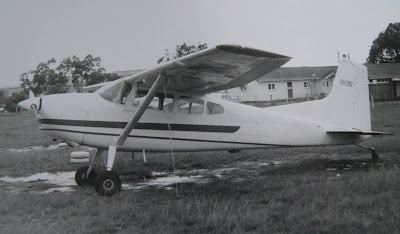