About to venture up on its first flight today is the Wayne Wilson built Aeros Ukraine (Also known as "Best Off") Skyranger Swift ZK-SRS , c/n 816 . Wayne has now built at least five aircraft. 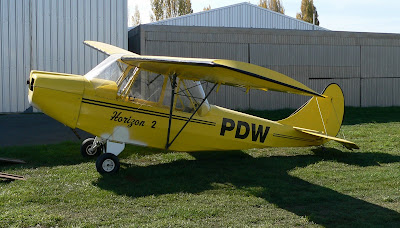 This Fisher Aero Corp Horizon II ZK-PDW , c/n HOR2 1989 , back on its wheels and ready for trailer transport down to Waihola for its owner Ron Bungard. It was registered to Ron on 10-10-08 but came to grief at Rangiora on 21-11-08 during a local training flight when it was landed short of the strip due to power loss. It got its initial registration of PDW from the initials of its builder Peter David Warner in 1999. It was damaged in 1999 when it struck a trailer. Then whilst on trailer delivery to Simon Adams at Rangiora from Richard Anderson of Masterton sometime in 2005, the trailer flipped and it was damaged enough for it to be rebuilt by the Belworthy's at Cust. 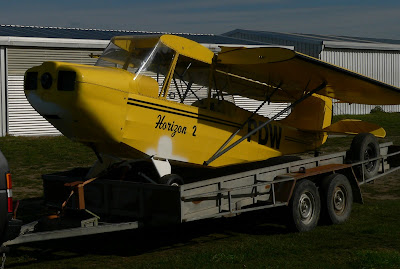 About ready to set off for Waihola (South of Dunedin).
Posted by Dave Paull at 19:12