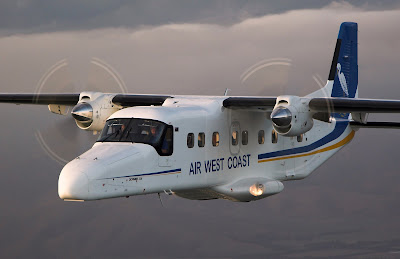 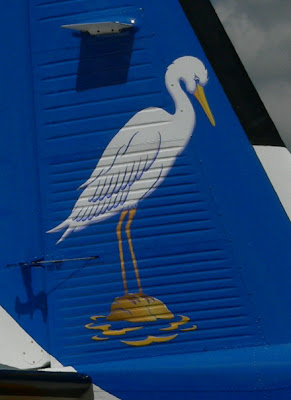 Above is the white heron tail art of this aircraft.
Built as D-COHC in 1986 it worked in the US for about seven years as N228DA and N275MC until becoming P2-MBO with Milne Bay Air. A period of storage with Dornier then to C-FEQZ from mid 2005. As such it ferried from Oberpfaffenhofen through points various to reach Christchurch on 02-02-2006 and to its Haupiri hideaway.
It was registered to Air West Coast as ZK-VIR on 01-09-2006 and after resolving some tech problems entered service on 19-03-2007 on the Greymouth - Westport - Wellington run. Its last service was Wellington - Greymouth on 01-08-08. It departed Haupiri (inland from Greymouth) on 16-02-09 for Auckland and on to Rarotonga and Papeete the next day bound for Curacoa to become PJ-DVA with Divi Divi Air. Its ZK marks being cancelled on 23rd of April.
Posted by Dave Paull at 07:17