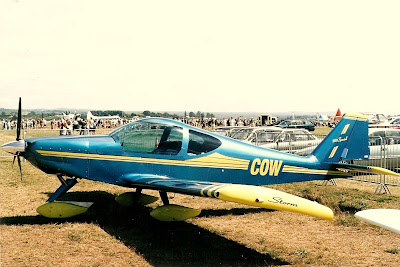 I guess a few people who follow this blog would know that the first ZK-COW was a Victa Airtourer 115 first registered to the Waikato Aero Club on 4/4/67 (thats 42 years ago!). After a series of owners in Kaitaia, Waikanae, Kaukapakapa and Canterbury it was cancelled on 19/5/98 and now is in the Wanaka Transport Museum.

Meanwhile on 5/57 (thats 52 years ago!) Aeronca Champion 7FC ZK-BUL was registered to Middle Districts Aero Club at Palmerston North. I remember seeing it quite often when I was growing up and I remember it had a duck egg blue/green fuselage. It was cancelled on 6/92.

I don't know if BUL and COW ever met, but on 25/9/01 another ZK-COW was registered. This one was a SG Storm 300 which was built from a kitset by CA and MH Schadler of Waimana which is South of Whakatane in the Western Bay of Plenty. The Storm series of aircraft is manufactured by SG Aviation of Sabaudia, Italy.

I guess the new ZK-COW could be descended from an Airtourer as both are low wing, all metal, sprung steel tricycle gear aircraft with about 100 HP motors. ZK-COW is now owned by The Flying Cow Ltd of Christchurch, and is based at Rangiora.

However in the intervening years, dairy technology advanced and soon a herd of COW clones arrived! All of these aircraft were built by CA and MH Schadler or in one case by RF Van Beek who also comes from Whakatane. For your interest I have posted them below. 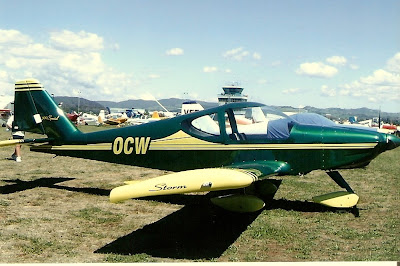 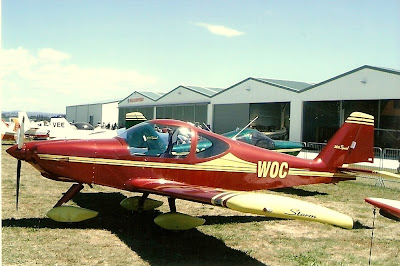 ZK-WOC was first registered on 16/3/05 and is now owned by R L Walker of Whitianga. 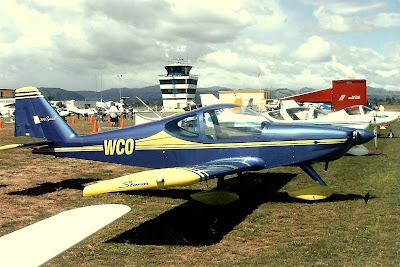 And ZK-WCO first registered on 16/3/05 is still owned by CA and MH Schadler at Waimana.
All of the above photos were taken at SAANZ fly ins at Tauranga in 2004, 2006 and 2008. I scanned these photos into digital format by scanning them on my basic Hewlett Packer printer/scanner and modifying them in Picasa, and I was very pleased with the results. They are better than taking a photo of a photo that I had done before.
There are/were 3 other Storm 300 aircraft in New Zealand and I might post them on another post.