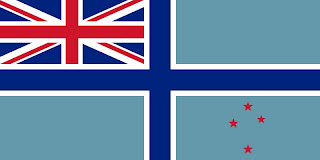 While admiring the photos Sir Minty captured over the weekend I spotted a flag on the winglet of Dynamic WT9 ZK-EWW and wondered to myself what it was all about.
A quick Google retreived another search engine, Wikipedia, and this drew me to conclude the flag was as depicted above. It is the Civil Air Ensign of New Zealand and dates back to 16 November 1938. According to Wikpedia, it is is usually flown from buildings associated with the civil aviation administration and it may also be flown by airlines. Does anyone know of this ensign adorning other aircraft in recent times?
Posted by MRCAviation at 21:34