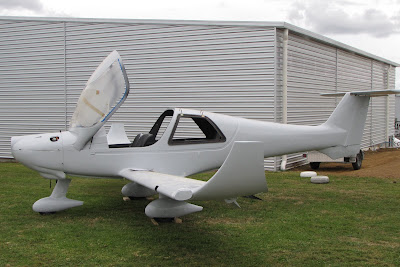 Congratulations to Mike Condon who got the questions essentially correct, although he guessed at the answer to question 3.

The plane is a 4 seater Dyn Aero MCR 4S which is being built from a kitset by Peter Armstrong. I think this was one of 2 MCR 4S kitsets that arrived in July 2008, so progress has been good. The MCR 4S is a remarkable aircraft that can carry a payload of one and a half time sits own weight, and cruises at around 150mph.

The photo was taken at the recent Pilot Expo at Ardmore.

I wonder how many other aircraft in Newe Zealand have ballistic recovery parachutes? 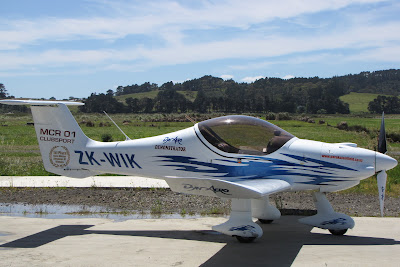 At least one other plane with a ballistic parachute is little brother Dyn Aero MCR 01 ZK-WIK. If you blow this photo up and look closely behind the canopy you can see the blow off cover. Photo taken at Parakai where it is owned by the agents Leading Edge Aviation. It was first registered on 22/5/07. 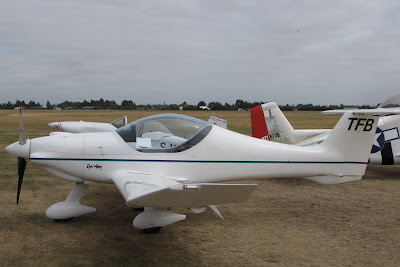 And I thought I would round off the Dyn Aero population of New Zealand by posting our other Dyn Aero MCR 01 ZK-TFB taken the the recent SAANZ flyin at Ashburton. This one doesn't appear a ballistic parachute. It is owned by E J Gardiner of Rangiora and was first registered on 14/3/01.
I understand that another MCR 01 is on its way to New Zealand in a container from France.