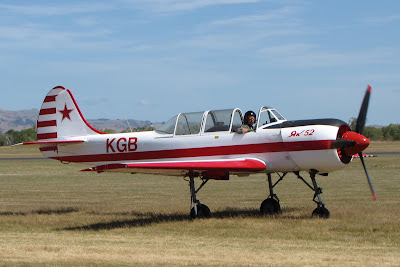 Anonymous has correctly identified the aircraft as Yak 52 ZK-KGB, photographed recently here at Wings Over Wairarapa. This is the only Yak 52 that I have seen with a spinner and a 3 bladed propellor.

This aircraft was first registered in New Zealand as ZK-LJH to Coromandel Pharmacy on 9/7/96. Its registration was changed to ZK-KGB on 1/10/97 after an offer that could not be refused may have been made to the previous owner of the registration ZK-KGB (which was a Periera GP2 Osprey amphibian that was owned and built by K G Belcher of Auckland - this Osprey is still current as ZK-OSP).

After owners in Wanaka and Auckland, it is now owned by R M Grant of Dillingham, Alaska, USA.
Posted by Sir Minty at 21:03