When Grayson Ottaway was photographing the "new" Cessna 195 ZK-AZK at Tauranga last Friday, there was also another elderly Cessna on the field. 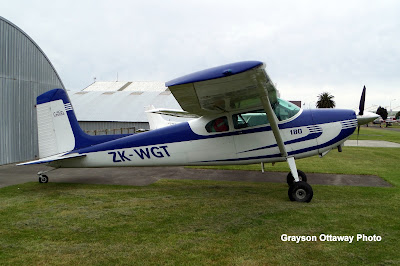 Cessna 180 ZK-WGT (c/n 30012) was over from Otorohanga and is in fact the oldest Cessna 180 in New Zealand, being the twelfth aircraft off the production line.  It was previously CX-AZP for many years in Uruguay before being imported into New Zealand in 2006 and first registered here on 5/1/07. 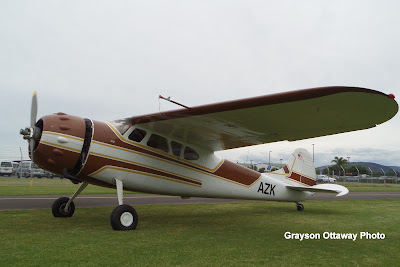 While I was pondering this I researched their dates of manufacture and found that they both emerged from the Cessna factory in Wichita, Kansas in 1953!  So that makes each of them 64 years old!  Also, the registration ZK-AZK was circa 1953 (although not taken up at that time), and our first Cessna 180 ZK-AZZ (c/n 30537) was registered in 1953.