As I have previously posted, there were two new Magni M24 Orion gyrocopters at Dargaville last Saturday for lunch.  John  Wiessing mentioned he was going to fly a few circuits in his and would I like to come? - Sure I would! 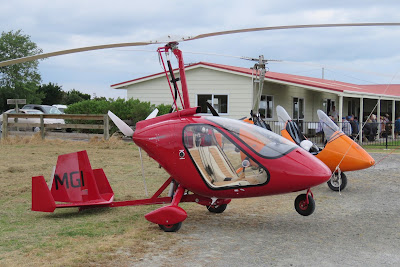 So after taxying to the end of the strip we lined up into the light wind, did our checks and pre-rotated the rotor up to around 250 rpm using the pre-rotator cable, then opened the throttle of the Rotax 914.  As we accelerated the rotor speed increased to around 350 rpm whereupon we popped off the ground and John held it level until the airspeed increased to 55 knots (best climb speed) and then we climbed out more steeply than I was used to in the Aero Club Storch with 2 up.  During the rest of the flight the rotor takes care of itself. 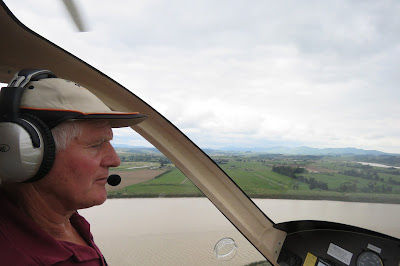 John told me that one of the benefits of gyrocopters was that you don't get bumped around by turbulence like you do in a fixed wing aircraft.  This is due to the much higher wing loading on the "wing" (rotor) and as you can appreciate the rotor has much less chord than a fixed wing, and it cuts through the air at a much higher speed.  It was a smooth ride. 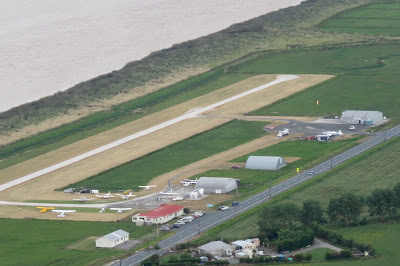 The circuit can be flown quite a bit tighter than in a fixed wing aircraft. 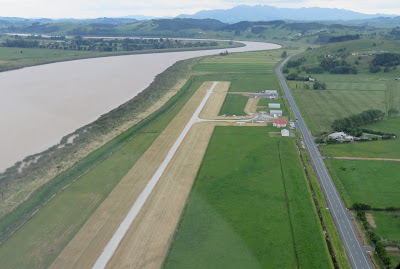 But the big difference for the fixed wing pilot is the approach, where John demonstrated a steep approach where you seem to be dropping like a stone!  In fact the two photos on approach were taken 11 seconds apart, the first from around 800 feet and the second from around 150 feet!  However, you can fly a more normal approach at 55 knots which felt more familiar. 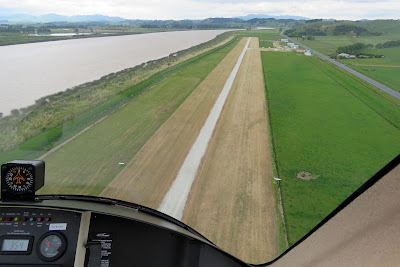 The actual touch down is very slow, but I am sure that John made it look easier than it was.  In fact John said that the most difficult part of the flight is the take off.

Thanks very much for the flight John.  I think I was spoiled by my first gyrocopter flight being in a very comfortable side by side enclosed cockpit model which gives great visibility.