Nieuport 11 Bebe replica ZK-NVK was finished by Craig Miller of Custom Aviation at Taieri assisted by Nigel Forrester after the airframe was commenced in the North Island. 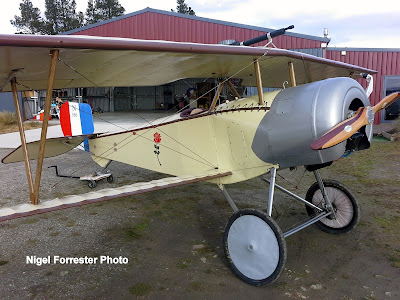 The aircraft is painted as N556 in the colours of Charles Tricornot de Rose who was the French WW 1 ace who in 1911 obtained the first military pilots certificate in France, and who is credited to be the first to appreciate that the aircraft could be a fighting machine rather than an observation platform.  His leadership of fifteen squadrons of Nieuport 11s in the air at the Battle of Verdun resulted in a great aerial victory when the Germans were "swept from the sky" at the orders of General Petain.

On 11 May 1916 he was killed when flying a Nieuport 13 on a demonstration flight near Soissons in North East France.