Registered yesterday 27/4/17 to the AHC XVI Syndicate of Blenhiem was the Nieuport 16 replica ZK-XVI2 (c/n AHC 01).  The aircraft was on display at Classic Fighters 2017. 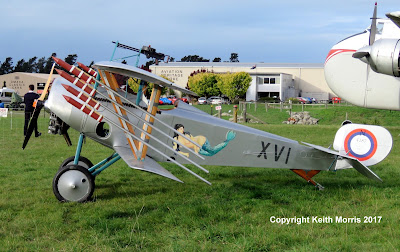 The aircraft is a full size Nieuport 16 replica but the engine is a modern Rotec R2800 radial of 110 HP.  It was originally started by Frank Luft of White Springs in Oregon, USA in 1974 and the partly built project came to New Zealand some years ago. 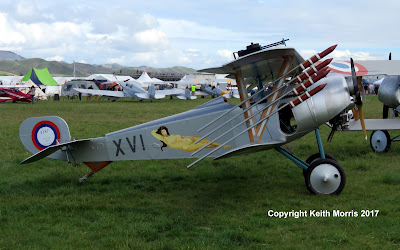 It is painted in Imperial Russian Air Force colours representing the aircraft of VM Pokrovsky in August 1917, which can be seen to be much more esoteric than the plain English aircraft of the time and even more exotic then the Germans!  The Imperial Russian Air services must have had some talented aircraft painters as the image on the starboard  side is of the Sleeping Venus by the Italian painter Gorgione da Castel Franco, while the image on the port side is of Mermaid to carry it into battle and back. (Click on the photos to enlarge them and get a bigger picture of the artwork).  It carries the number N 4187 on the rudder. 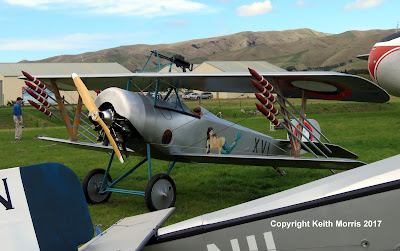 And the other striking feature of the aircraft is that it is equipped with 8 replica Le Prieur rockets, the originals of which were incendiary rockets made from cardboard tubes with spear points. These were fired at observation balloons or airships while the aircraft was in a 45 degree dive.  The effective range was only around 100 metres.  Aircraft fitted with Le Prieur rockets did bring down several observation balloons but never a Zeppelin. I don't know if it is planned to fly ZK-XVI2 with the Le Prieur rockets in place.