No It Didn't Fly

Last night I posted about Ivan Mudrovcich's Pearse replica ZK-RPT which was going to attempt to fly today from a "secret"location.  (See:  http://nzcivair.blogspot.co.nz/2016/04/will-it-fly-tomorrow.html ).  And below I attach another photo of the aircraft taken from the WILL It FLY facebook page: 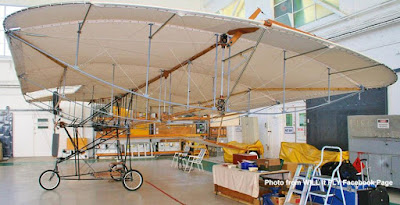 For those of you who did not watch TV 3's Story programme tonight, the aircraft did not fly due to a lack of power from the engine (which Ivan has also built and that had been going well previously).

The secret location is Whitianga airfield and there were shots of the aircraft being tinkered with on the Story programme.  However, Ivan Mudrovcich, who is 78, suffered a heart problem and was airlifted by the Westpac Rescue Helicopter to Auckland Hospital, where it was reported that he was texting suggestions to Whitianga about solving the engine problem.

The team at Whitianga were reported as saying they will keep trying for a successful flight.

To view the Story story have a look at: