Another three years and another ten S 6s, as detailed below. 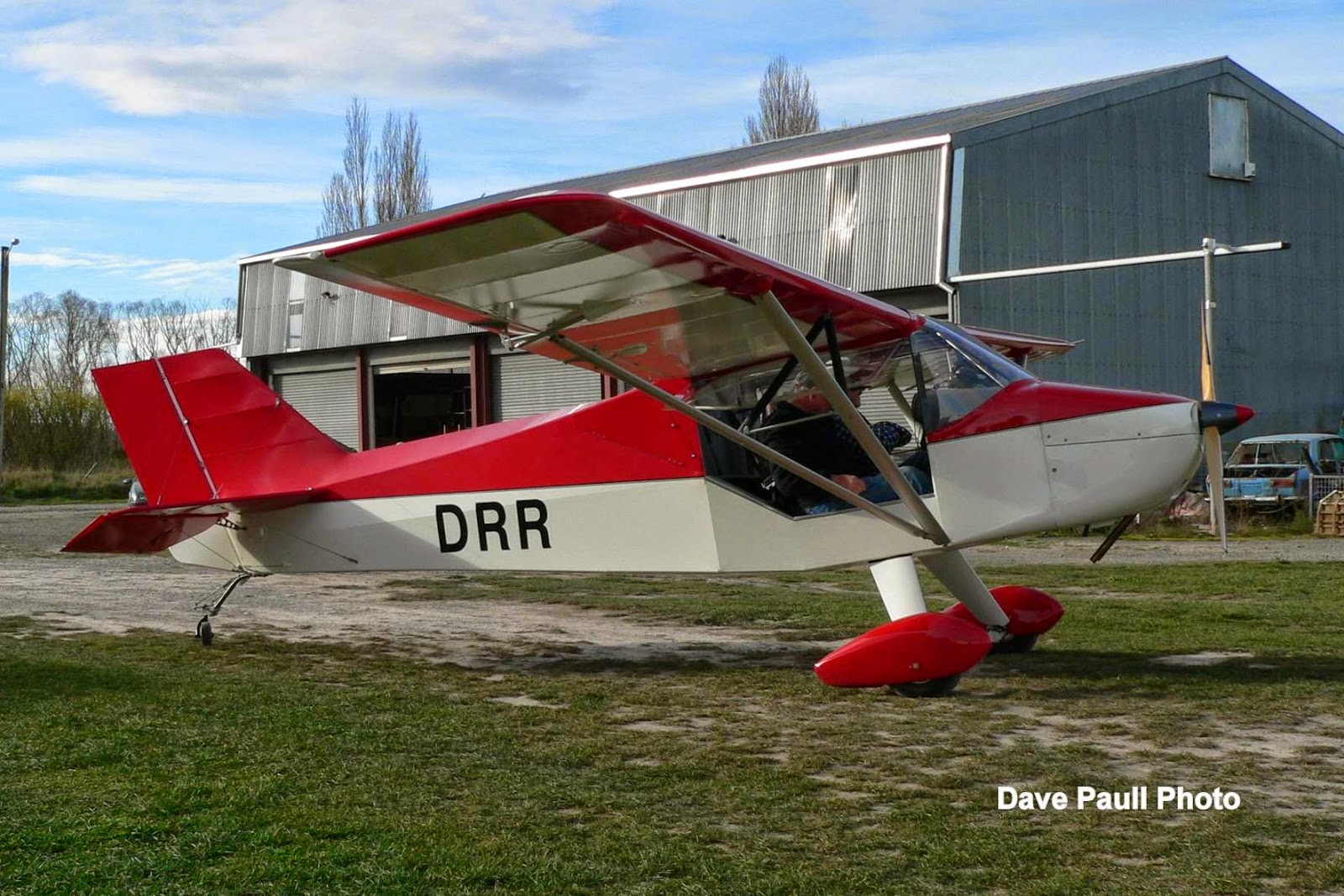 Next up was Dr Graham Ritchie's S 6S ZK-DRR, which was built by him at Ashburton and was first registered on 23/5/06.  I reckon the S 6 looks a little different with wheel spats, but obviously the aircraft needs a better surface to operate from. The above photo was taken at Rangiora on 1/6/07.  ZK-DRR had a take off acccident at Waimate on 26/2/08 whch resulted in a rebuild and a new colour scheme as below. 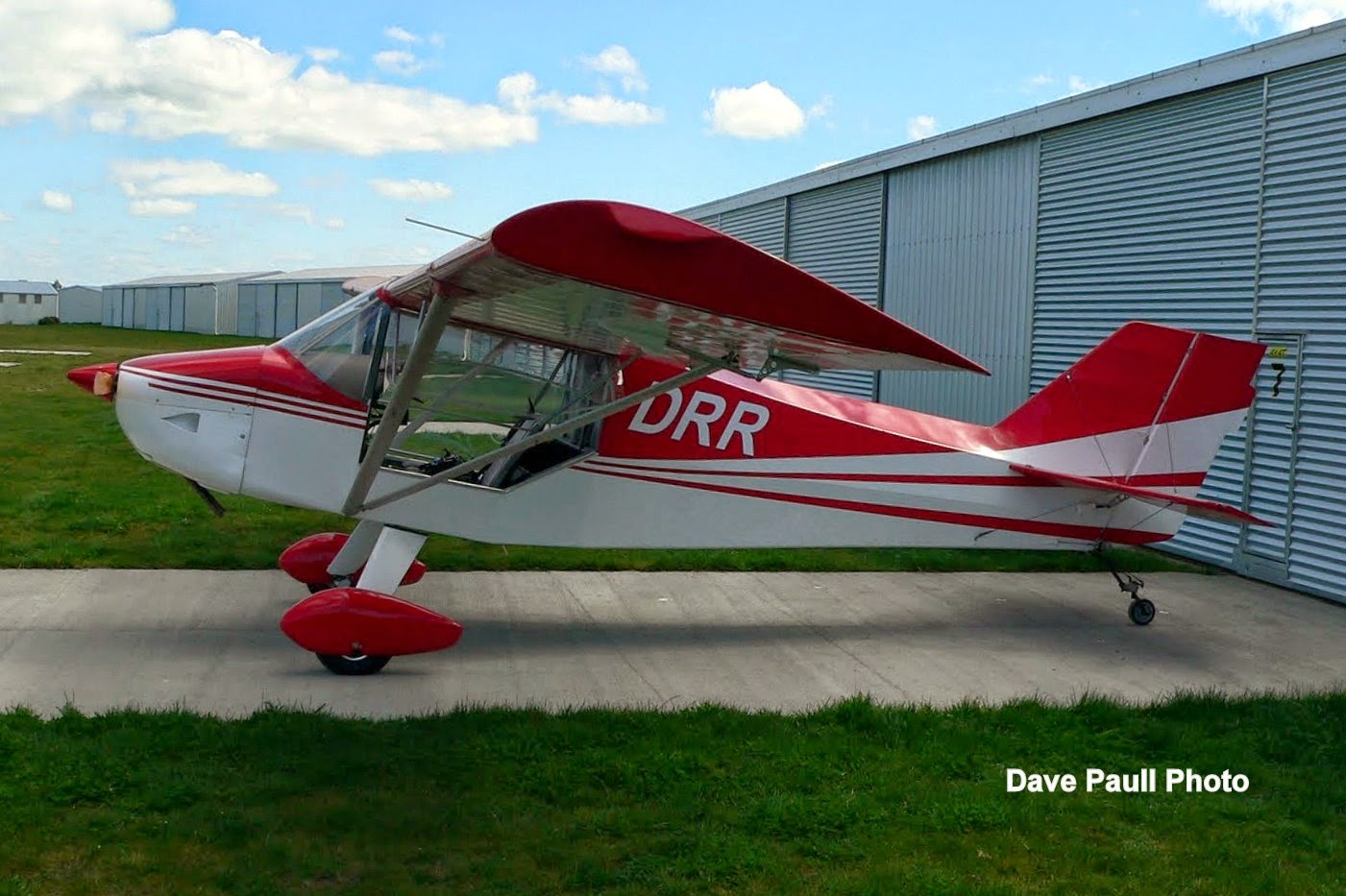 So here it is photo'd at Ashburton on 7/10/09.  Russell Brodie told me that it was rebuilt with the 138 square foot sport wing. 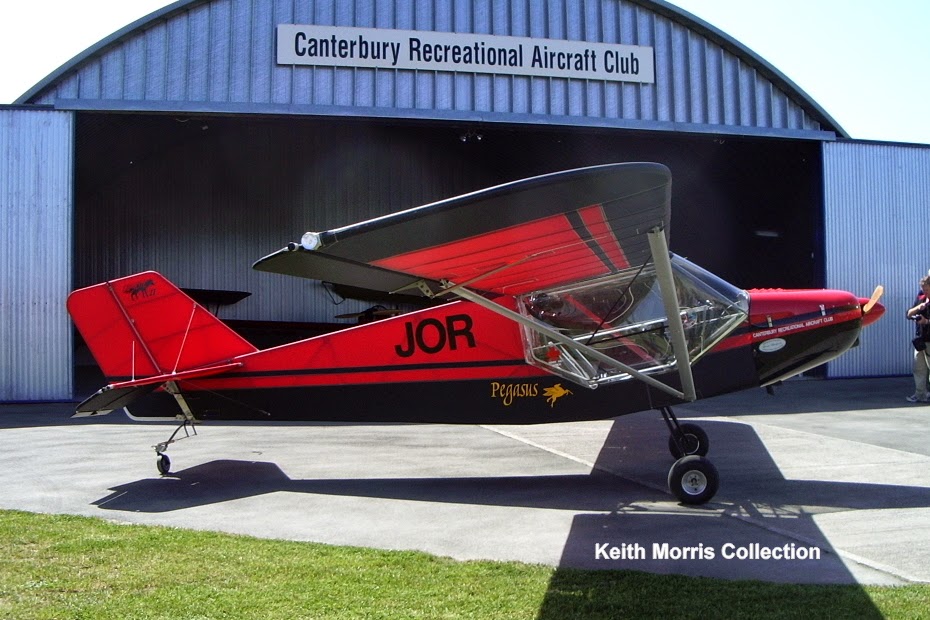 ZK-JOR is the Canterbury Recreational Aircraft Club's second S 6ES, but this time a taildragger, mainly by Paul Woodley and Mike Small..  It is photo'd above at its grand unveiling at Rangiora on 14/10/06 where it can be seen that it is named "Pegasus". 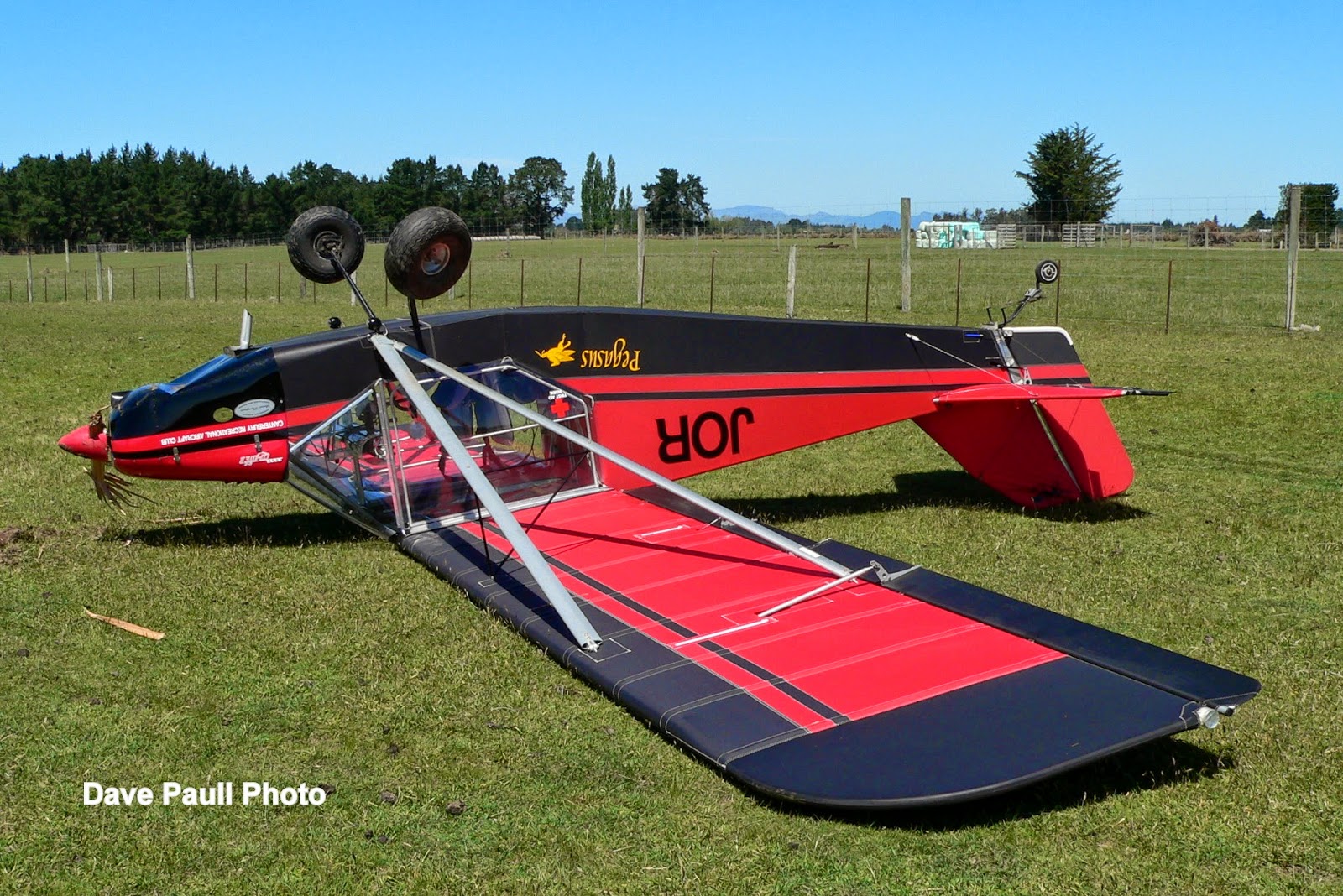 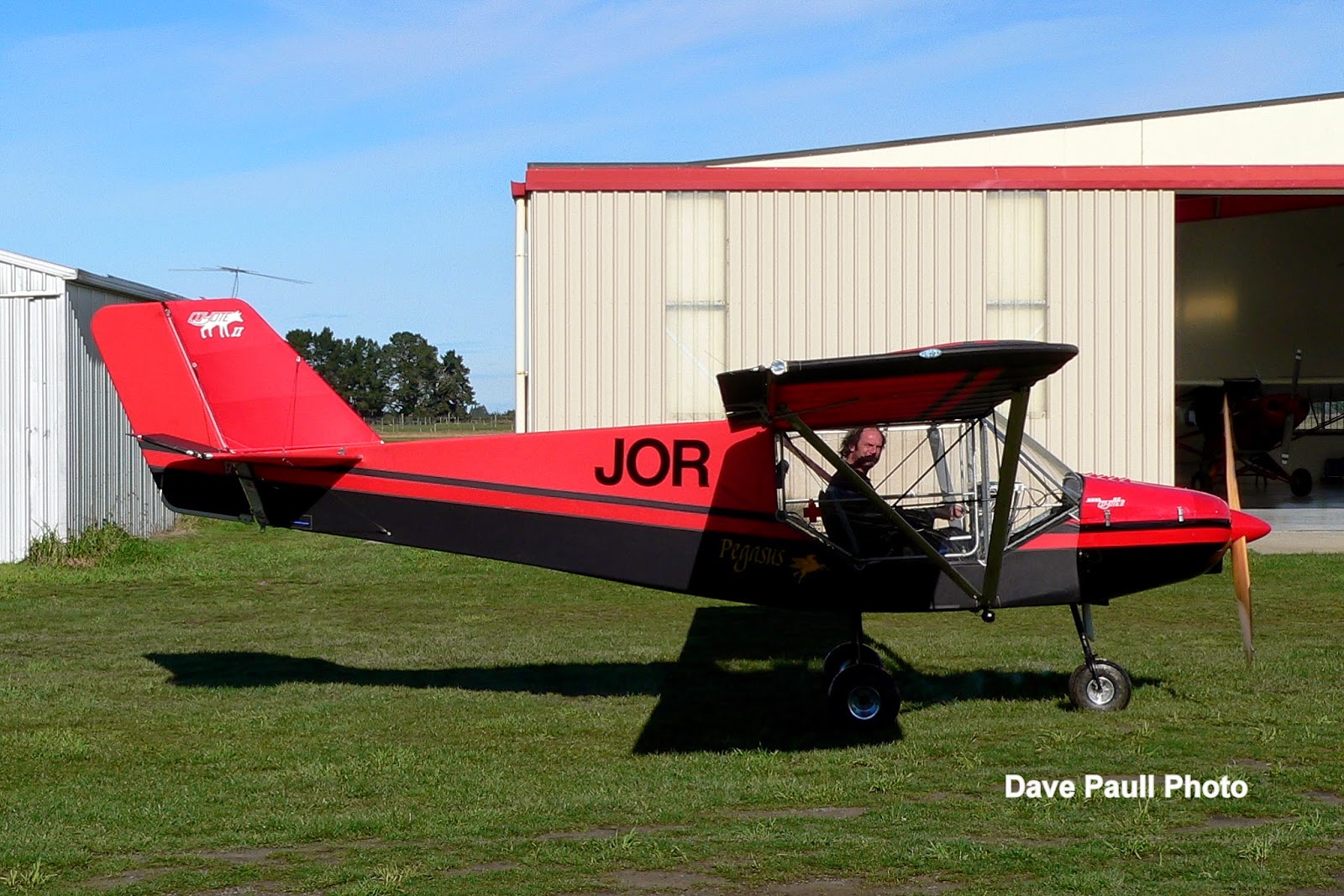 So it was rebuilt as a tri-gear aircraft.  It is still owned by CRAC. 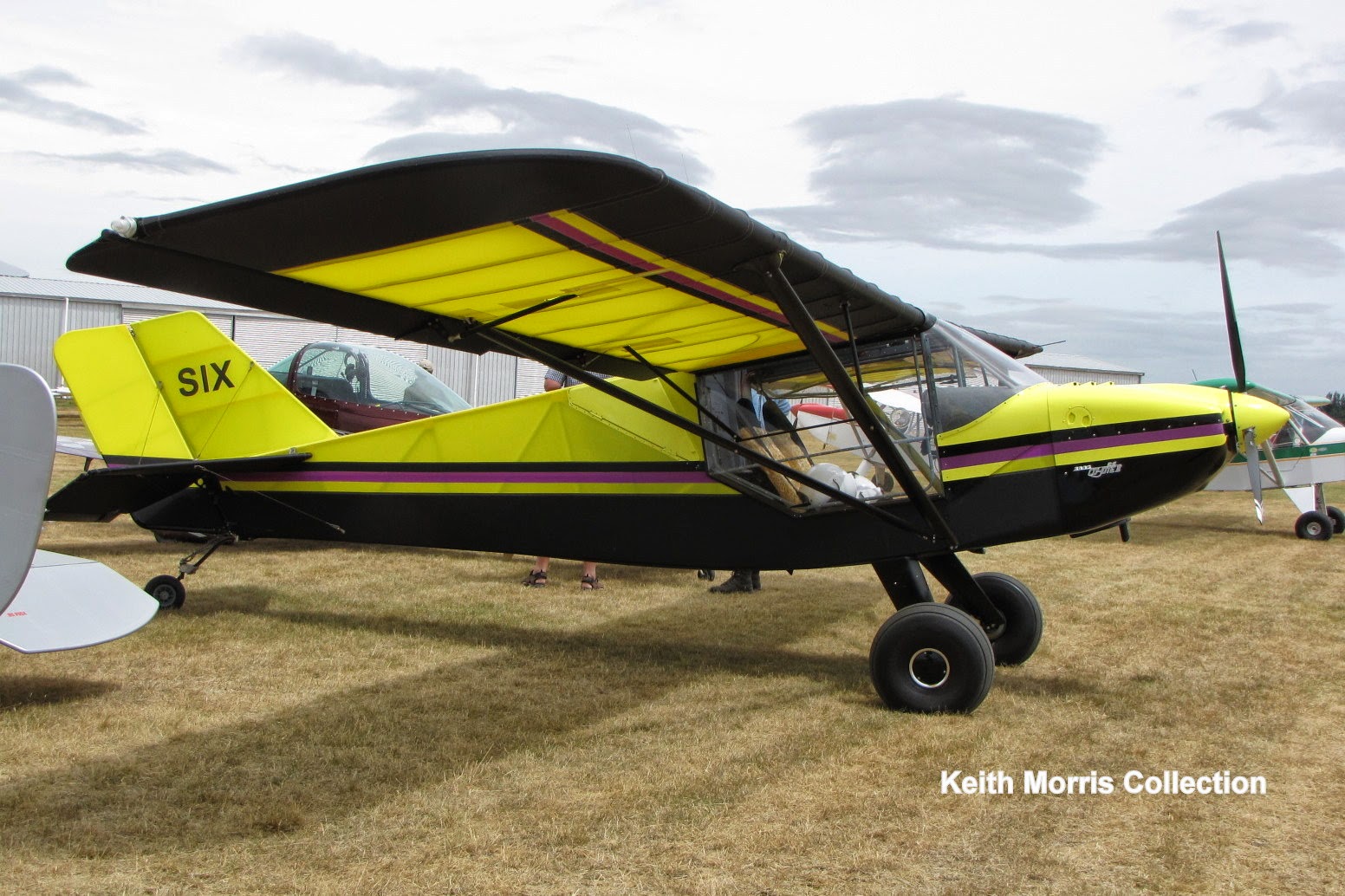 ZK-SIX, a S 6ES model, was built by Grant Caldicott and was registered to him and M Howell of Pleasant Point on 6/10/06, and it is still in the same ownership.  Its first flight was on 23/11/06.  The above photo was taken at the 2009 SAANZ flyin at Ashburton. 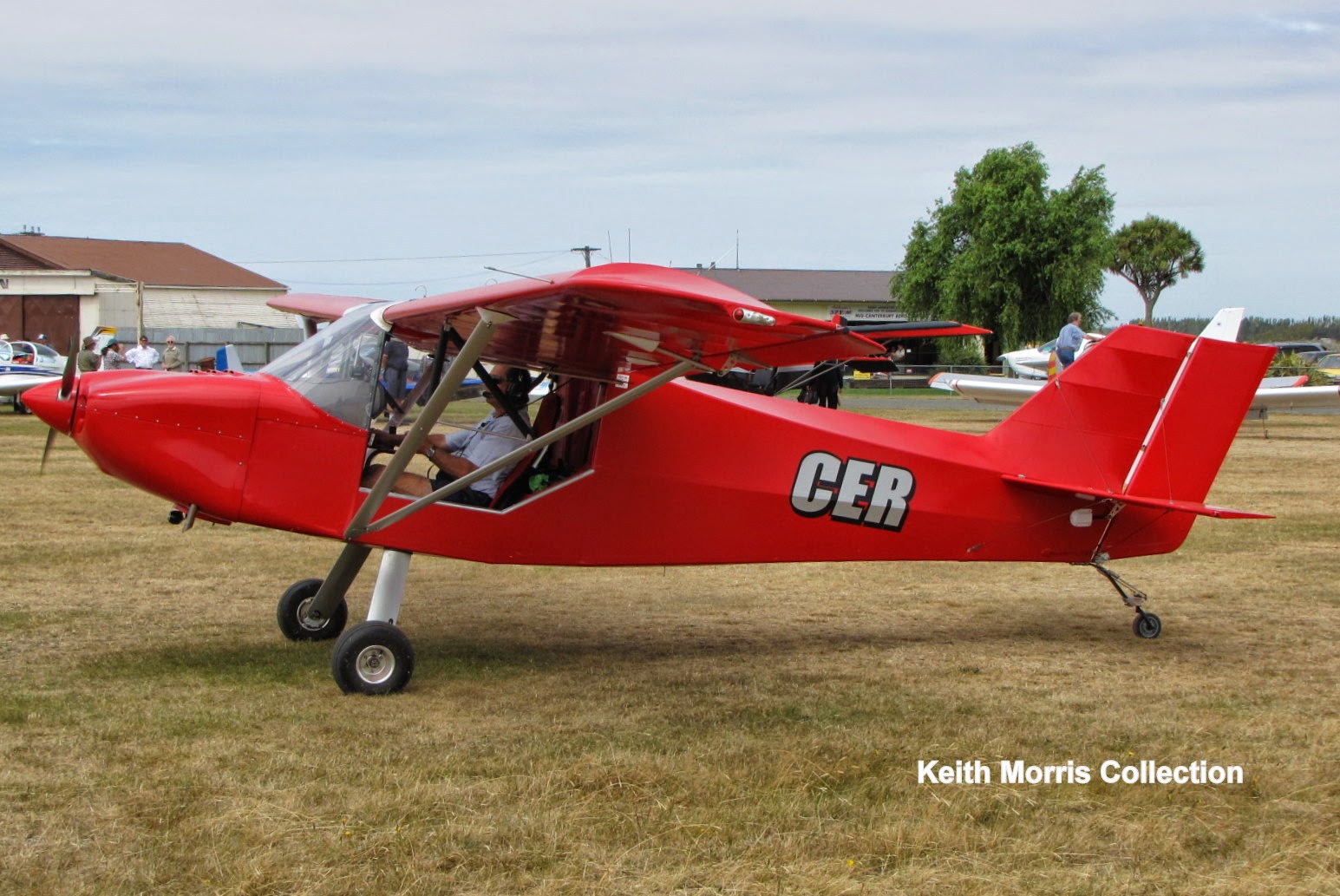 S 6S ZK-CER was built by Christopher E Read of Blenhiem, and was first registered on 26/3/07.  The above photto was also taken at the 2009 SAANZ flyin at Ashburton. 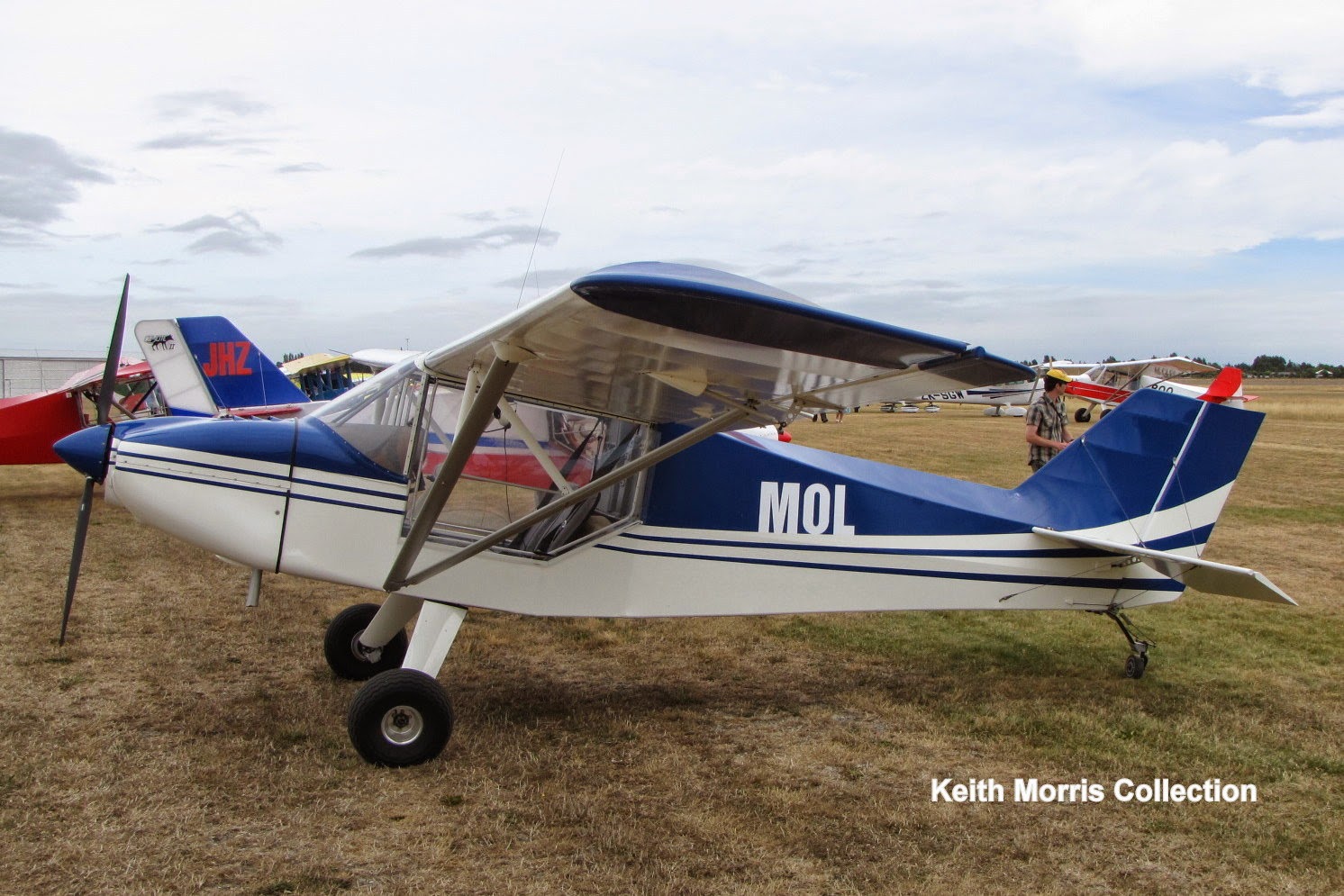 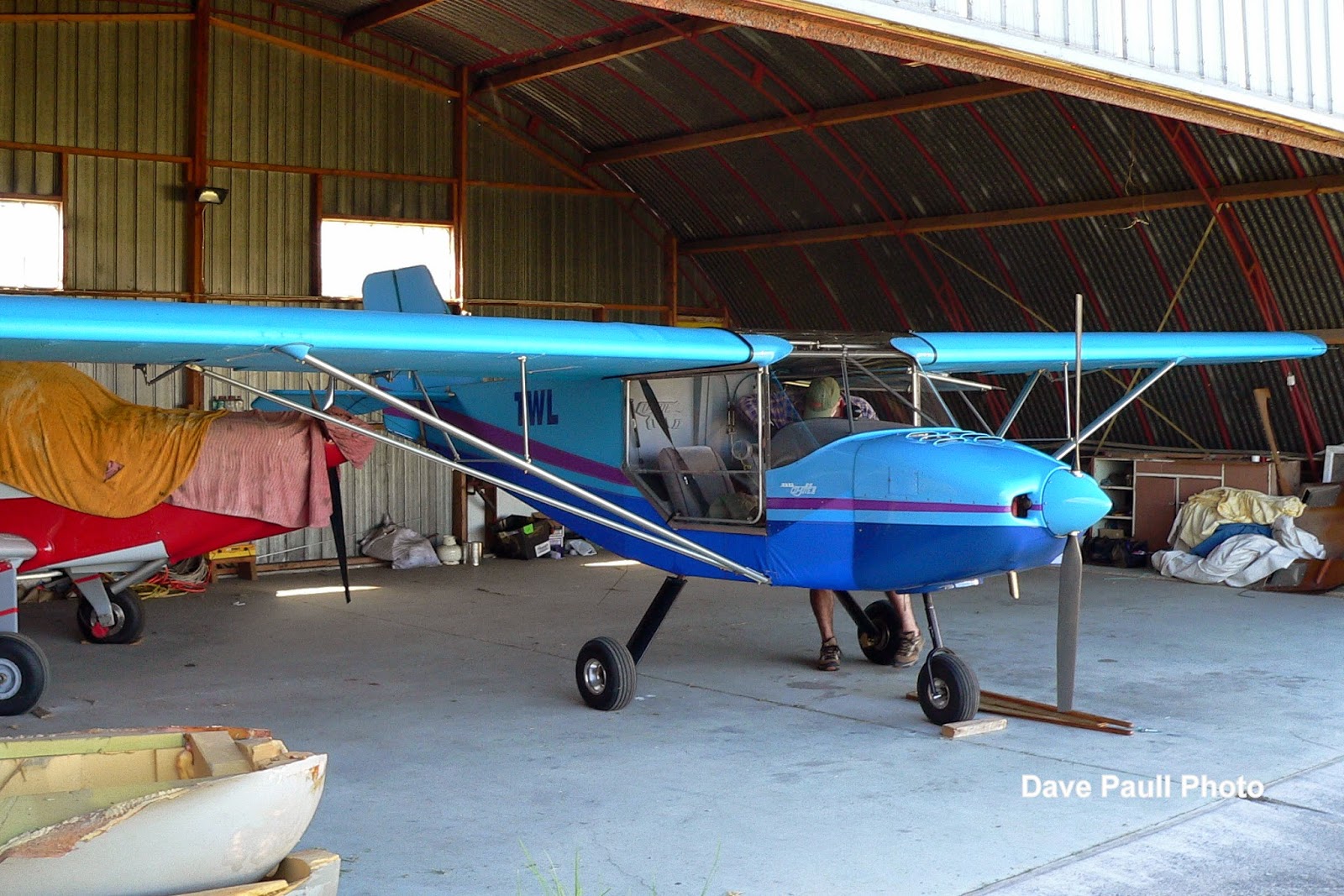 S 6ES tri-gear ZK-TWL was built by Martin Froggo of Rotorua and was first registered to him on 2/8/07.  The above photo was taken in a hangar at Tauranga on 16/3/09.  Although it is one of the few North Island S 6s I have never seen it at any flyins or seen any other photos of it, so it is just as well that Blue Bus stumbled across it. 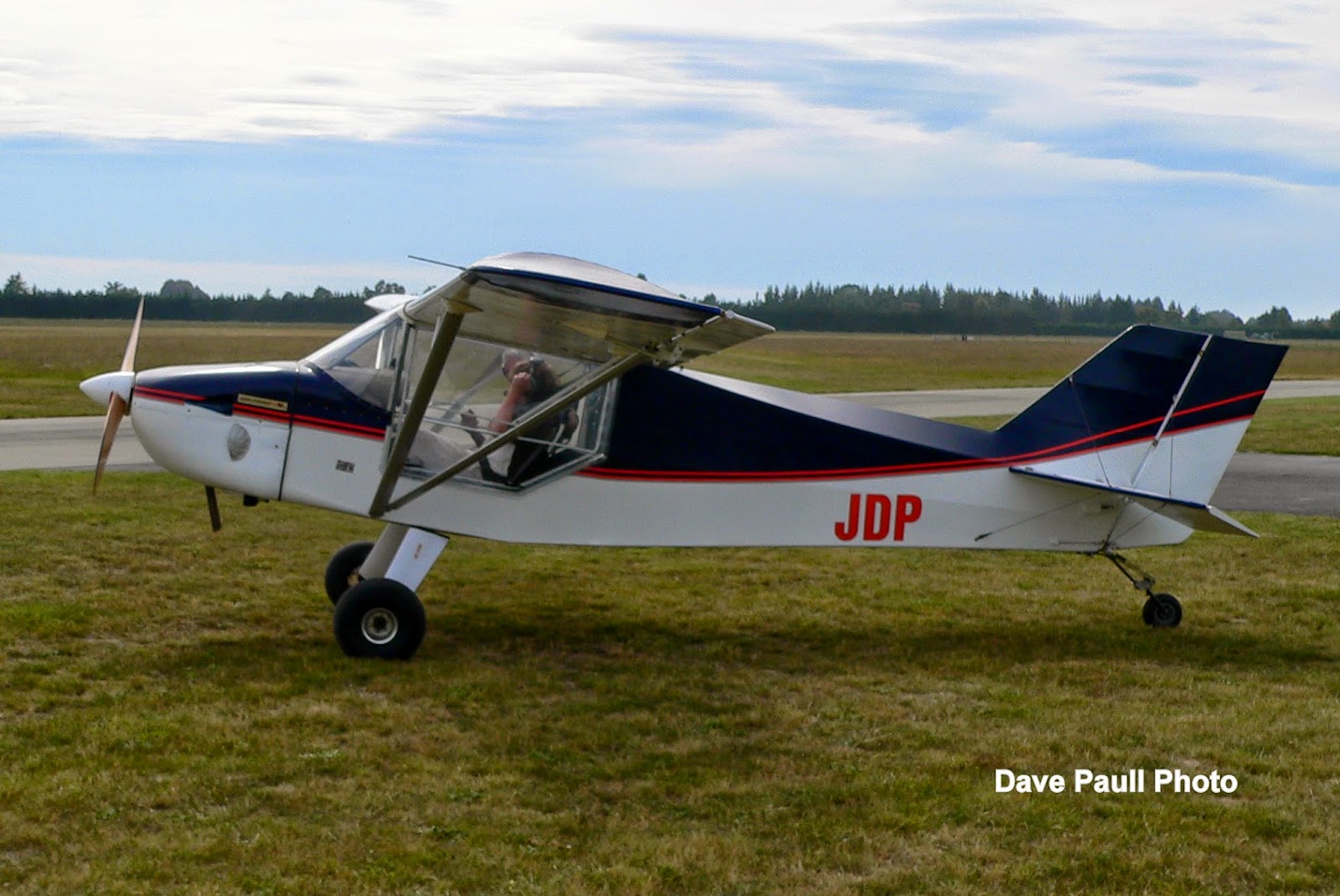 S 6S taildragger ZK-JDP was built by John Lindner of Woodbury in Canterbury (Canterbury and South Canterbury are hotbeds of RANS S 6 activity).  It was first registered on 24/1/08 and the above photo was taken at Timaru on 8/2/09. 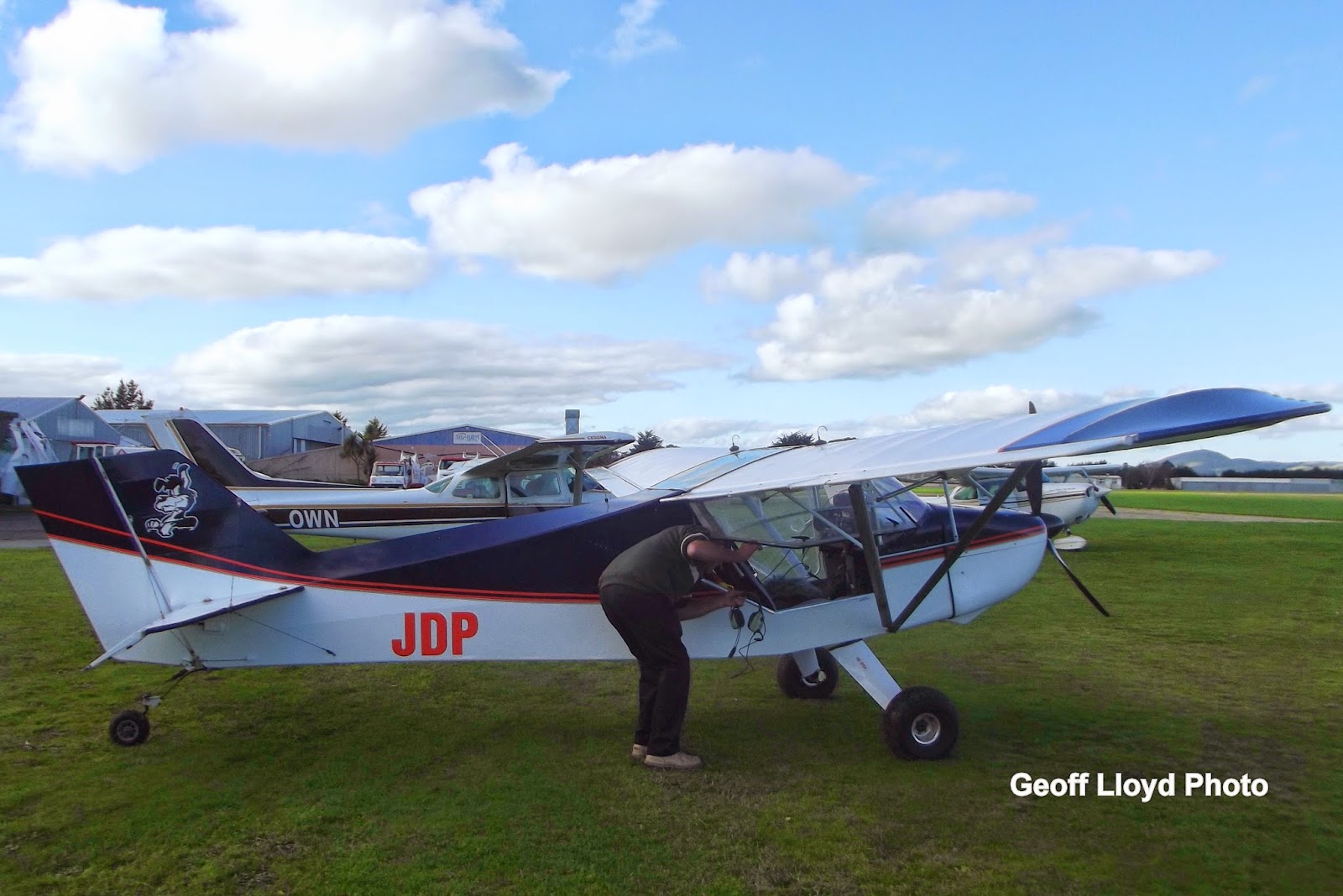 On 30/10/10 it was sold to Wendy Milne of Waipawa who bases it on her farm airstrip at Kowai, inland from Waipukurau and where the recent SAANZ flyin held a flyout to, to partake of scones with jam and cream!  Although I saw it there, I did not think to take a photo of it.  However Geoff Lloyd recently captured this photo of it at Masterton on 1/6/14, now with a doggy cartoon decal on the fin. S 6S ZK-OFF was built as N8422C by JF Leclerq of Milwauke, Wisconsin in 2001.  It was imported to New Zealand by David McMillan of Greymouth and was first registered in New Zealand on 22/4/08.  As can be seen in the above photo, it still wears its US registration on the fin. 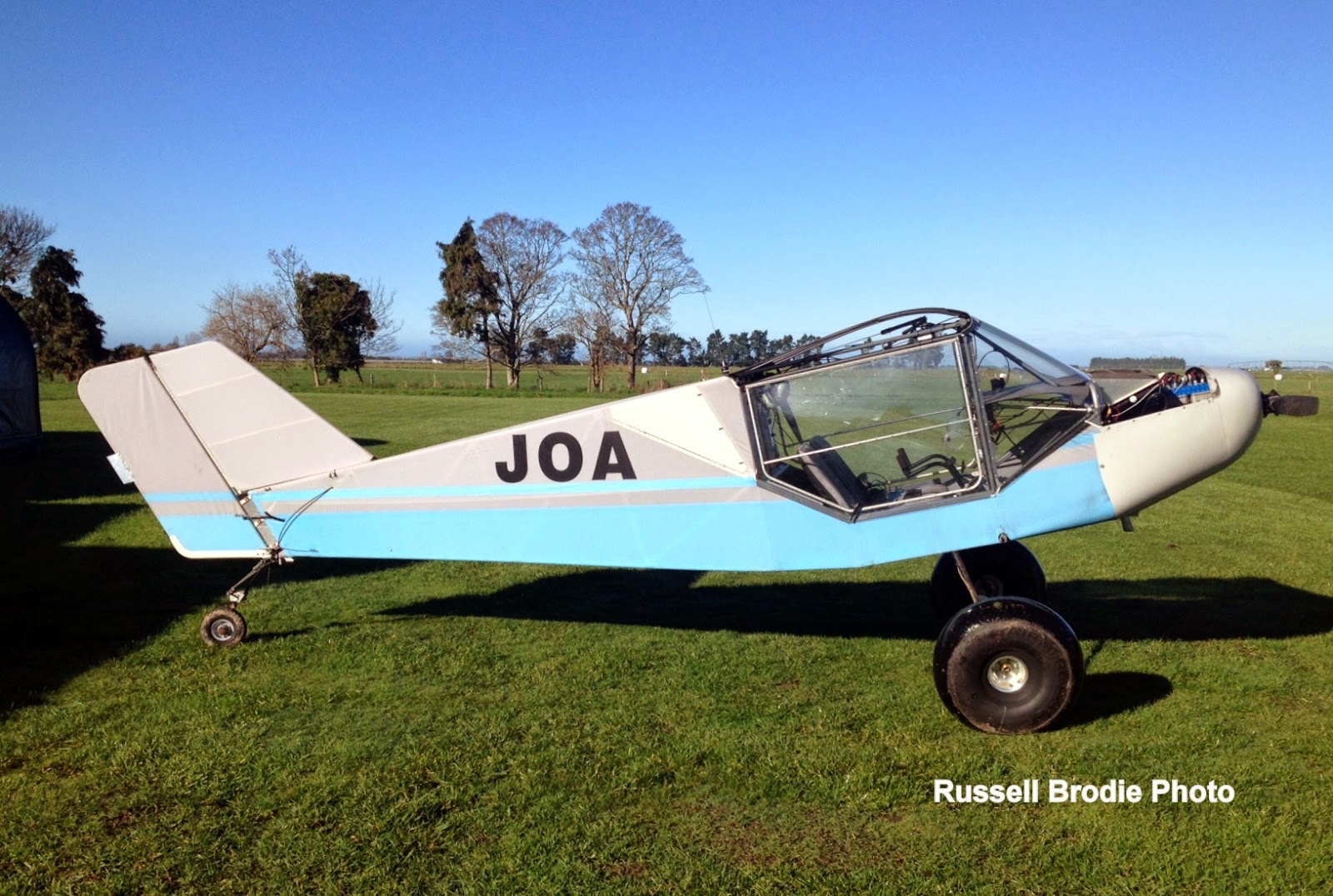 S 6ES taildragger ZK-JOA was registered to the Ireland Partnership of Waimate on 5/6/08.  It is currently being refurbished for sale by Russell Brodie of East Canterbury Aviation.  Russell kindly pushed the aircraft outside to take this photo on 19/6/14. 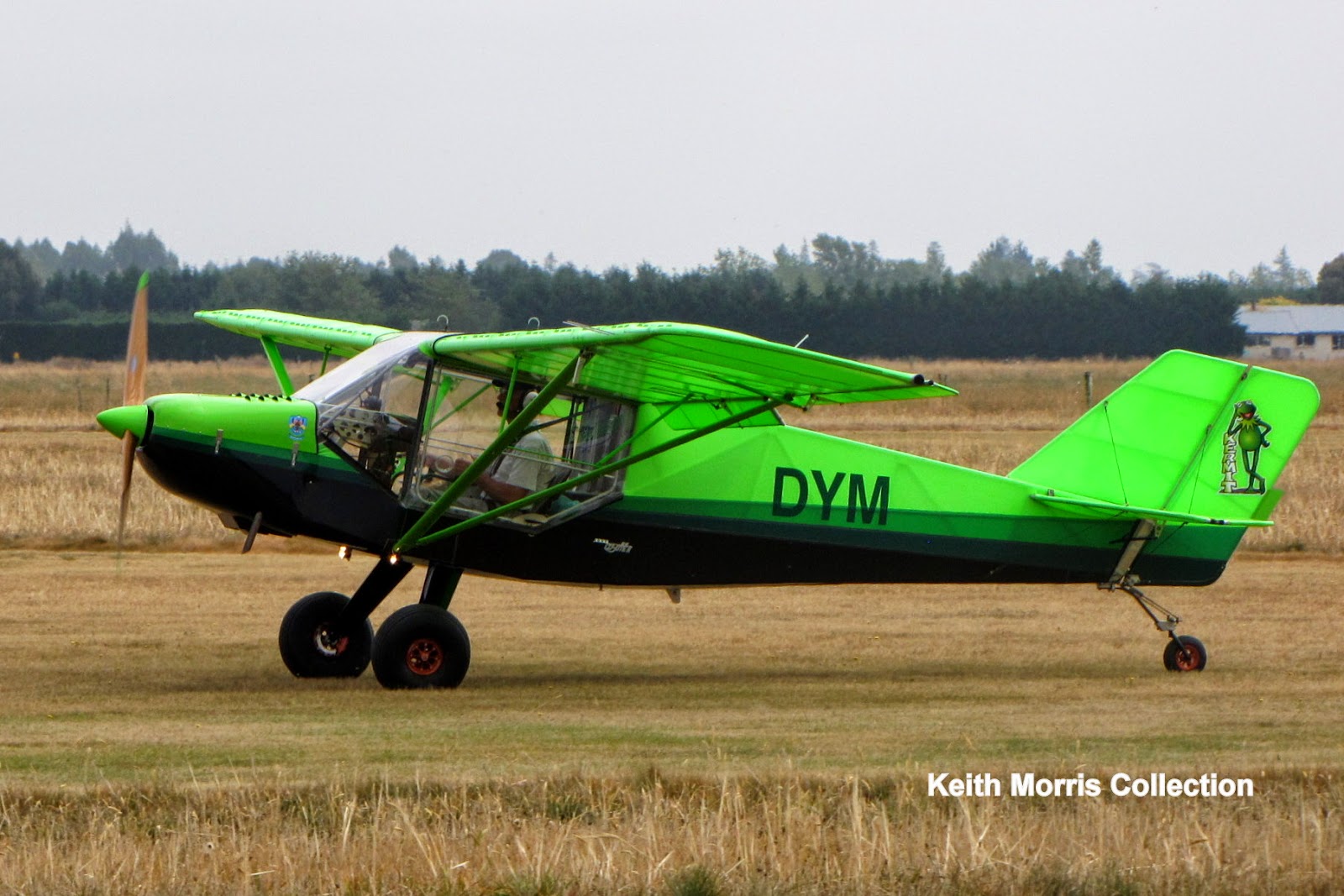 And finally for this bunch, S 6ES ZK-DYM (referred to as Kermit for obvious reasons), was built by Dave Mitchell of Amberly, and was first registered on 16/9/08.  It first flew on 12/10/08.  It is powered by a Rotax 912 engine.  The above photo shows it arriving at the 2013 SAANZ flyin at Ashburton.  Dave has recently built a new set of wings for ZK-DYM - the sport wing from RANS of 138 square feet and of lesser span than the standard ES wing.

This illustrates how virtually no S 6 will be the same as there are three types of wings that can be fitted, as well as a big variety of engines and also the different covering systems.